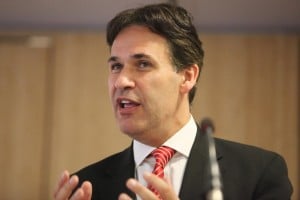 Professor Richard Susskind, IT adviser to the Lord Chief Justice, has warned lawyers that they have a “window of opportunity” before technological changes in the 2020s transform the way they work.

Addressing the Global Law Summit, Professor Susskind said “entrepreneurial, imaginative and creative lawyers” should seize the opportunity to “think differently” about what they do.

“The future of the law depends on entrepreneurialism being injected into our profession.”

The professor told a session on the future of the law that “gargantuan shifts” were on the way as we move from a society based on print to one based on technology.

Having given a potted history of IBM’s Watson, he said that “on any view” artificial intelligence (AI) had arrived, and medicine was leading the way. “The quality of diagnosis will in a few years outstrip any individual or medical teams,” he said.

Professor Susskind said that although law was the “most information and document intensive” sector of all, it had been “very late” to embrace change and suffered from “irrational rejectionism”.

He said computers could already outperform paralegals and junior lawyers in e-discovery, and “nothing would be done by humans” in this area by 2020.

However, Chris Osborne, co-chairman for Europe, Middle-East and Africa (EMEA) at US-based giant FTI Consulting, said he believed “the work behind AI” would take a “little bit longer” to transform the legal world.

He described Watson as a “huge effort”, and the result of IBM employing a large team of people.

He accused technology of “adding its own complexity” to legal work, which it then helped to take away. “Law firms which expand globally will always prosper,” Mr Osborne said. “Complexity is being added faster than it is being taken away. The firms in the middle will be squeezed.”

In an earlier session on innovation in the law, Neville Eisenberg, managing partner of Berwin Leighton Paisner, said there would be much more ‘client self-service’ in the future, including “services available entirely through online services without having to interact with human beings”.

He added: “Services will become much more tailored for significant clients. Advances in technology and AI will have massive implications. Much that has been done in the past by lawyers will be done by machines.”