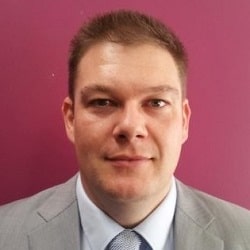 A multi-disciplinary construction business has become an alternative business structure (ABS), in part to reduce confusion among clients.

“When we were a consultancy with non-practising lawyers, clients were confused about what we were doing and what we were able to do,” he explained.

“If a client rang because they wanted a contract review or some drafting they would ask: ‘Are you a lawyer?’ We would have to explain who we were and how we were regulated. The ABS clears away that ambiguity.”

Mr Benson said he did not want to wait for the arrival of the new Solicitors Handbook, which will allow solicitors to practise from unregulated firms for the first time. The new rules are expected to come into force this summer.

“We wanted to get on with it because it was holding us back.”

Mr Benson went to law school in Lancaster, then emigrated to Australia and qualified as a solicitor in Perth, working for a predecessor of DLA Piper as a commercial construction lawyer.

He then worked in-house for a mining company and as a commercial manager for an energy corporation.

Mr Benson returned to Britain in 2016, setting up a firm called The Contract Doctor, specialising mainly in construction contracts, before founding BWL Consulting the following year in Darlington and Birmingham with bid writer and fellow director Michael Lee.

The firm offers bid, tender and commercial services. Mr Benson said legal services included a “steady flow” of construction adjudications, along with a “constant need” from clients for help with contracts, particularly when dealing with larger customers.

The firm opened an office in Ireland last year as part of a joint venture which concentrates purely on bid and tender writing.

Mr Benson said that, despite his British origin, his status as a registered foreign lawyer meant he could not be the head of legal practice at the ABS. This role is filled by another director, solicitor Hayley Gilbert.

Instead he became head of finance and administration.

Mr Benson is currently overseeing the opening of BWL’s next office, in London, which he expects to happen within the next few months.

“Travelling to Darlington is an overhead that needs to be covered. We’re trying to make ourselves as cost effective as possible.”

Mr Benson said BWL was hoping to appoint a non-executive director by the end of this month, a chartered civil engineer, who would help the firm move into construction consultancy services.

“We’re a bit of a niche firm and trying to do a few things very, very well. Can different professions work together? We think the answer is yes, in a one-stop shop.

“It’s not so much about cost savings, though we price very competitively. Not having to go to more than one company makes clients’ lives easier. They’re getting all the expertise they need in the same place.”