Company “no longer a suspect” in SFO Quindell probe 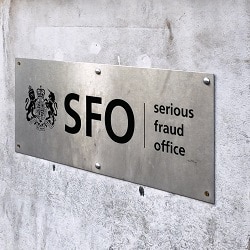 The AIM-listed company formerly known as Quindell is no longer a suspect in the Serious Fraud Office’s (SFO) investigation of what happened before the sale of its legal arm to Slater & Gordon, the prosecutor has confirmed.

The announcement about Watchstone is the first from the SFO since it launched the investigation in August 2015, little more than two months after the deal completed.

“As the investigation remains active, we cannot provide further information at this time,” the SFO said. This indicates that individuals remain under scrutiny.

A series of investigations began after Quindell’s 2014 accounts were published with substantial restatements of prior year revenues, profits and net assets.

The Financial Conduct Authority dropped its investigation after the SFO became involved.

In 2018, the Financial Reporting Council reprimanded and fined two firms of auditors – Arrandco Audit (formerly RSM Tenon Audit) and KPMG – over their conduct in relation to Quindell’s accounts, including failing to “exercise sufficient professional scepticism”.

Last year, Slater & Gordon settled its £637m claim in deceit and breach of warranty against Watchstone for just £11m.

Unveiling Watchstone’s 2019 results last week, chairman Richard Rose said that, during the course of the litigation, “we identified claims against other third parties which we are pursuing”.

Chief executive Stefan Borson added that “we understand that the previously threatened class action litigation first announced in September 2015 has been abandoned”. This was being brought by Your Legal Friend.

Last November, London litigation firm Harcus Parker sent a letter before action on behalf of shareholders, claiming that they lost money because of misleading statements made by the company.

Mr Borson said Watchstone “will vigorously defend all such claims if so brought”.

The board is planning to dispose of its remaining trading business, and the latest sale of a subsidiary has left the group with “significant cash reserves”, Mr Rose said.

“We are taking steps to return the majority of this to shareholders in a tax-efficient manner, being mindful of the continuing legal matters in the group.”

Watchstone intends to return £51m by the end of next month, which would bring the total cash returned to shareholders to £465m.