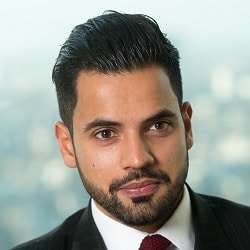 Leading commercial firm DAC Beachcroft has launched an “in-house chambers” which plans to expand rapidly to meet the needs of corporate clients wanting a one-stop shop.

Sahar Farooqi, one of the two barrister partners leading the service, said that the aim was for it to be “the biggest of its kind” by end of the year.

Mr Farooqi, who began his career as a self-employed criminal law barrister, leads it with Jonathan Robinshaw. Together they led DWF Advocacy, the listed law firm’s advocacy division which also styles itself as being like an in-house chambers, until the end of last year.

Mr Farooqi said that, like a traditional chambers, the service would have a clerking team and had applied to run a pupillage scheme.

Unlike a traditional set, however, solicitor-advocates would work alongside barristers. while Bar students who had completed their vocational training would be used as advocates. All of them would be employed by the firm.

The service will initially focus on insurance-related disputes work, such as personal injury, property, costs litigation and fraud.

After that, a “targeted expansion” of the range of services was expected, responding to client demand.

Mr Farooqi said most law firms which employed barristers had only a few of them, and they tended to do general work as well as a small amount of advocacy.

DAC Beachcroft, by contrast, wanted to create a “chambers-style service in the law firm”, which would expand rapidly.

By the end of this month, he said, there would be 10 members of staff in place, most of them barristers but including a clerk. By the end of the spring, this would rise to 25 to 30 barristers, solicitor-advocates, other advocates and clerks.

“This is about investment in innovation,” Mr Farooqi said. “Jonathan and I chose the firm as much as the firm chose us. What we intend to build here is the biggest model of its kind.”

He said the advocacy service would produce an “entirely new stream of revenue” for the law firm, while clients would benefit from having a solicitor and barrister in the same cultural environment, where it was much easier for them to interact.

“It reflects the fact that a lot of clients of big firms want those firms to offer them innovative services with multiple functions under one roof. As time goes on, more and more people will be doing that.”

Mr Farooqi said there was no reason why, in the future, barristers could not become QCs while working for the service.

“Being in a position to offer them a one-stop shop for their litigation and dispute resolution needs means we can add significant value and give them a tailored service that sets us apart from our competitors.”

Stephen Pritchett took over as head of DWF Advocacy last year, joining from 23 Essex Street Chambers. It has 15 barristers, pupils and other advocates in its ranks.