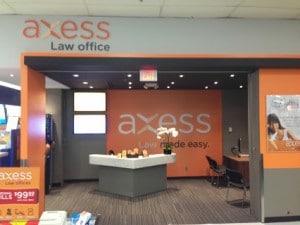 A Canadian law firm which runs offices inside Walmart supermarkets is planning to almost double in size next year, it has emerged.

Axess Law, which currently has branches at ten Walmarts across Toronto, plans to open eight more in Ontario next year, including in the country’s capital Ottawa.

Mark Morris, co-founder of Axess, told Legal Futures: “Our mandate is national. There are around 380 Walmarts across the country and many are viable options for us.”

Mr Morris said there were thousands more Walmarts in the USA where the Axess model could work, not to mention Asdas in the UK.

“Walmart is interested in traffic. We attract significant numbers of people who would not normally shop at Walmart. It’s a pretty good marriage between Walmart’s interests and our own.”

Axess Law offers flat-fee services for wills, conveyancing, non-contentious family work and more recently immigration, including a $99 will. Offices are open from 10.00am to 8.00pm during the week and all day Saturdays and Sundays.

The firm began with a traditional downtown office in Toronto in 2012, opened its first inside a Walmart store the following year and had three by the spring of 2014.

Mr Morris, co-founder of Axess Law with Lena Koke, said that to expand more rapidly than the 18 offices already planned it needed access to venture capital, but this was prevented by the cautious approach of the Law Society of Upper Canada to alternative business structures.

“It would be nice to have different options,” Mr Morris said. “The personal injury lawyers here are largely against ABS and for the next few years I do not see it coming to the fore.

“This is not a permanent state of affairs. People can keep their walls up for as long as they like, but eventually the sea water rushes in.”

Mr Morris said that as Walmart did not own any part of Axess Law, its relationship to the supermarket was simply as a tenant paying rent to a landlord and there were no restrictions on how the law firm operated.

He said standard fixed-price wills made up around 35% of the firm’s business, and it was careful to avoid contentious issues or matters beyond its competence, such as customers wishing to disinherit children.

In family work, Mr Morris said flat fees were available for uncontested divorces, separation and cohabitation agreements. In conveyancing, he said the firm was prepared to “abide by our pricing structure, even at a loss”.

He went on: “Probate is proving to be a winner for us. We are not only building on existing practices but moving into new areas such as immigration, which is a brand new area for us.

“Our business plan is predicated on commoditised law – things that need legal oversight but are repetitive.”

The UK government said at the end of last month, in a Treasury paper on boosting competition, that it would “further reduce barriers” to alternative business structures, making it easier for supermarkets and estate agents to offer legal services like conveyancing, probate and litigation.