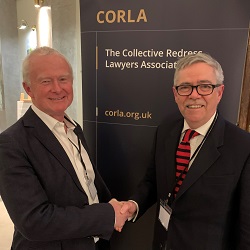 Calls for long- and short-term reform to the group action regime yesterday marked the launch of the Collective Redress Lawyers Association (CORLA).

It came as the Competition Appeal Tribunal (CAT) refused to certify two opt-out collective actions over foreign exchange rigging, saying they had to be refiled as opt-in claims.

Professor Mulheron, who works out of Queen Mary University of London, recommended that CORLA and others draft a report for government detailing the case for reform. “The evidence of need will be there,” she emphasised.

The second stage would be to create a cross-industry working group to draft legislation providing for a generic opt-out regime, similar to that produced by a Civil Justice Council working party in 2008 of which Professor Mulheron was a member. Its recommendations were rejected by the Labour government of the day.

Tom de la Mare QC of Blackstone Chambers told the event that there were more immediate reforms that would also help.

Noting that the current regime of group litigation orders and representative claims was “really skinny in the extreme” – the former have just six rules in the CPR plus one on costs – he said most of the “real operating rules” were in case law. This contrasted with the CAT’s detailed collective action framework.

Mr de la Mare warned that the complexity of group litigation was “only going to grow” and called for “some form of codification” of the application of the overriding objective to group litigation to aid judicial decision-making.

He also wanted a generic pre-action protocol letter and a generic group litigation guide, which could then be built up in the specialist guides, along with a forum for best practice – potentially a court user group in addition to CORLA – and a single judge put in charge of “the overarching issues of policy”.

Mr Day told the event that one of the association’s aims was to encourage claimant firms to work together – rather than against each other – and “give an air of respectability to what we do and do it in a way we feel proud of”.

Mr Greene added: “Recent examples show that the ad hoc response, in this jurisdiction, to mass wrongs leaves access to justice for citizens far behind. CORLA will seek to address, with others, the failings to build an effective comprehensive process for all.”

The group representative in one is Michael O’Higgins, former chair of the Channel Islands Competition and Regulatory Authorities, and the other Phillip Evans, a former panel member and inquiry chair at the Competition and Markets Authority.

Although the banks did not apply to strike out the claims, the panel concluded that, due to the level of generality or abstraction contained in the pleadings, both applications could be struck out and the tribunal had the power to do so.

However, it decided not to at this stage as the applications raised “novel and difficult questions”.

The majority went on to decide that the claims should be brought on an opt-in basis, instead of opt-out, amid concerns about the strengths of the claims and their view that opt-in proceedings would be practicable.

The dissenting panel member said he would have granted an opt-out order, given there were potentially more than 40,000 claimants.

The applications were stayed and the claimants given permission to revise them and seek certification on an opt-in basis within three months.

Had they decided on opt-out, the tribunal would have chosen Mr Evans to take the claim forward, the first time the CAT has had to decide what was called a ‘carriage’ dispute.

Mr Evans said he intended to appeal. “Based on my background in consumer welfare, I have first-hand knowledge of the practical difficulties of opt-in legal proceedings, which I presented to the tribunal. In my view, the CAT has underestimated these challenges…

“If these claims are blocked from continuing on an opt-out basis, the result will be that tens of thousands of individuals and businesses will be excluded from the opportunity to recover compensation in relation to admitted anti-competitive behaviour by the banks.”

Mr O’Higgins said: “This decision is extremely disappointing, because this claim is exactly the sort of the claim that opt-out proceedings were introduced to facilitate in order to provide access to justice to all entities affected by the illegal behaviour of cartelists.”

UPDATE: Mr O’Higgins has decided to appeal as well “in order to best serve the class that we seek to represent”.