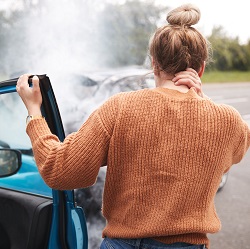 However, the volume of clinical negligence claims increased during the same period to exceed pre-pandemic levels.

That means motor claims registered with the CRU – which recovers social security benefits and NHS costs in injury cases – have fallen 39% in just two years.

This likely also reflects the introduction of the Official Injury Claim portal for motor claims worth up to £5,000, which has been criticised for being hard for injured people.

The figures were obtained by the Association of Consumer Support Organisations (ACSO). Executive director Matthew Maxwell Scott said: “That is an astonishing reduction and will have had a significant impact on the amount of injury claims costs paid out by insurers.

“That is why it is so disappointing that consumers have received so little benefit: the fall in claims has not been mirrored by a similar drop in the cost of car insurance, and we’re years away from being able to know whether the insurers have made good on their promise to the government to hand back £35 in premiums to motorists following the whiplash reforms.”

Mr Maxwell Scott pointed to a study ACSO commissioned last year from economics consultancy Pragmatix, which said the excess profits accrued by insurers purely from the impact of Covid likely totalled £3.3bn, equivalent to £118 per policy. This was from a combination of fewer accidents and thefts.

“Motorists saw just £25 in premium reductions during 2019-2020, and many commentators think prices will go up again as a result of the new FCA fairer pricing regime, which came into effect at the start of this year.

“As the cost of living soars, it is a nonsense that insurers should hold onto these excess profits without giving hard-pressed motorists a financial break, especially as the government’s own figures confirm a big drop in claims last year.”

Though there was only a relatively low fall in the number of employer and public liability claims between 2020 and 2021, the contrast with 2019 is stark.