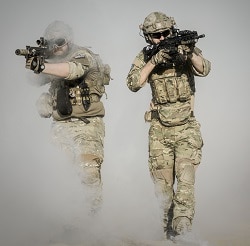 A compliance officer who stole more than £500,000 from her law firm after being caught up in an online “romance scam” with what she thought was an American serviceman, has accepted a ban from working again in the solicitors’ profession.

Pamela Wareing was the head cashier and the compliance officer for finance and administration of Blackpool law firm Easthams until 20 December 2016, when she was dismissed and also arrested.

According to a notice published today by the Solicitors Regulation Authority (SRA), “the money was paid to a purported soldier in the United States army. It was later established that Ms Wareing had been the victim of a fraud”.

Media reports say that the ‘soldier’, named Carlos Lopez, told her that he wanted to marry and set up home with her, but urgently needed money in the meantime. She sent it to a bank account in Dubai, from where it was moved within seconds.

The US Army Criminal Investigation Command says that it receives hundreds of reports a month from individuals who have fallen victim to “romance scams” of this nature.

Ms Wareing attempted to cover up her actions by making false postings in relation to a probate matter. The client funds were replaced by the directors of Easthams.

Ms Wareing was arrested on 20 December 2016 and in March pleaded guilty to stealing the money. She is due to be sentenced next month after magistrates sent the case to the Crown Court for sentencing, where she could get up to six years’ imprisonment.

Under the section 43 order imposed by the SRA, Ms Wareing – who also goes by the names of Pamela Shuffelton and Pamela Mcgough – cannot work in the solicitors’ profession without the SRA’s consent.

“Mrs Wareing had been employed by Easthams for some 20 years and was the company COFA, a very trusted employee.

“The thefts began the  day after our accountants had left the office having completed our end of year accounts. Our second cashier was on leave and I was in hospital having had emergency surgery to remove a cancerous tumour.

“As soon as we discovered the theft on 20 December, we notified the SRA that day, our accountants had ascertained the amount of the theft from client account by close of business the following day and my co-director Debra Hepplestall and myself made good client account shortfall by 21 December 2016.

“No client suffered any loss and the SRA have cleared us of any wrongdoing.

“Finally, we would like to acknowledge the help and support given by our amazing and loyal staff for their help and understanding since the theft was discovered.”

In a separate case, meanwhile, the SRA has issued a section 43 order against Sharyn Lawson, who was a billing specialist at leading City firm Reed Smith.

She was found to have misused the firm’s credit card by claiming £6,553.94 of personal expenses as work-related items.

Ms Lawson was also given a written rebuke and ordered to pay a financial penalty of £2,000.