Co-op to recruit 3,000 staff as it bids to dominate consumer legal market 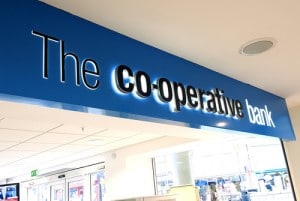 Co-op Bank: plans to offer legal services in all 330 branches

The Co-operative Group has today announced plans to create 3,000 jobs in the legal sector over the next five years as it laid out its ambitions to create the largest consumer law business in the country.

The Co-op – which received its alternative business structure licence in March – has confirmed that it will extend its current trial of legal services and funeral planning services through 30 branches of The Co-operative Bank and Britannia to encompass all 330 high street branches.

Around 90% of the new jobs will be fee-earner roles and it said legal apprenticeships and opportunities for study leave will form an important part of the recruitment drive. Co-operative Legal Services (CLS) is already one of the largest employers of chartered legal executives in the country.

Group chief executive Peter Marks said that CLS, which currently operates out of Bristol employing around 450 people, would open five regional hubs across England and Wales over the next five years.

This is in addition to the new family law operation which will launch in London later this year.

Mr Marks said: “We already have a first-class reputation for delivering professional services. We see the law as yet another area where a Co-operative solution can be successfully applied for the customer’s benefit. Over the next five years we want to fundamentally change the face of legal services and make access far easier – today’s announcement underlines that ambition.”

Mr Marks said CLS’s ambition is to provide a service “that will stop people feeling daunted by the prospect of having to work with a solicitor”.

He continued: “We believe that the presence of The Co-operative’s trusted brand and values, our UK-wide branch network, first class people and services together with fair and fixed pricing options, will enable customers to find it much easier to access expert legal advice from someone they trust.”