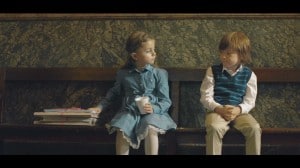 A still from the Co-op TV advert

The Co-operative Legal Services has today (CLS) stepped up its attack on the legal market by launching its first ever TV and radio advertising campaign.

The multi-million pound campaign will air on TV and radio stations across London, and include social media, press advertising and PR activity.

The campaign has been created by advertising agency Leo Burnett, with the TV advert – directed by former barrister Jamie Rafn – focusing on how consumers are intimidated by legal jargon and feel like children when dealing with legal matters (watch it below).

Ian Mackie, director of marketing at CLS, said: “The launch of a major advertising campaign is part of our move to build our brand and support the expansion of our legal services.

“Our offer has never been more relevant, particularly with the changes to legal aid and the questions this raises about access to justice. We believe it’s vital to make it as easy as possible for people to gain access to legal advice in both an affordable and unintimidating way. This campaign is designed to support our promise to offer straightforward advice and fixed-fee services that give people clarity and transparency over costs.”

He added: “The TV advert aims to highlight our understanding of and empathy with customers ‘fears’ about dealing with legal matters. The radio ads then concentrate on how we help people going through legal issues with expert, honest advice and clear pricing, so consumers can resolve things as smoothly as possible. The radio ads feature real-life consumer stories.

“We are really excited about the campaign which brings to life our promises – to provide fixed fee services, free initial advice, drop the use of jargon and handle cases with sensitivity.”

Mr Rafn read law and qualified as a barrister before turning to film. He wrote, directed and produced his debut feature, ‘Soho Square’, and worked on a series of short films before undertaking commercials for brands such as T-Mobile, Volvo, Budweiser, and Johnnie Walker, which won a Cannes Gold Lion.

He recently directed the first season of BBC sitcom ‘Roger & Val Have Just Got In’ and last year directed a Budweiser advert which premiered during the Super Bowl.