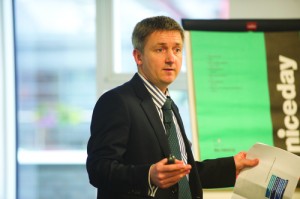 Wates: profession has the wrong mindset

Co-operative Legal Services (CLS) may look to acquire a conveyancing practice as it brings property work in-house, it revealed yesterday.

Following the announcement that it intends to recruit 3,000 new staff over the next five years, CLS managing director Eddie Ryan told a press briefing that it will shortly decide whether to “buy or build” a conveyancing practice; it currently outsources the work to a law firm in Leeds.

He warned that “every solicitors’ practice is competition” for CLS. “People see us as a major threat, and we are a major threat… Good lawyers will continue to exist. Poorer lawyers will go out of business and that’s the market share we are going to grab.”

Martyn Wates, deputy group chief executive of the Co-operative Group, told journalists that while “some solicitors are great”, not all are and “for something as important as access to justice, that cannot be right”. He promised “consistently great service at a great price… A lot of people entering this market are seeing it as a gold rush. We are doing it because we see it as fundamentally the right thing to do”.

Of the fee-earners among CLS’s current complement of 475 staff, half are either solicitors or chartered legal executives, but Mr Ryan said that during the recruitment this proportion might change depending on the area of law; for example, he said he expected a higher proportion of fee-earners working in the new family team to be legally qualified.

As first reported on Legal Futures last month, the family law team will open in London this July and has already secured a legal aid contract. Mr Ryan said that even without any promotion the team receives around 10 enquiries a day and has begun advising customers. It will next week be assessed by the Legal Services Commission for the Specialist Quality Mark that providers need to have.

Mr Wates said that in principle CLS will offer other legal aid services, although no decision has yet been taken on whether to move into criminal defence work.

The opening of five new hubs for CLS around the country – starting in London – in part reflects that CLS is “starting to saturate the market in Bristol for legally qualified people”, Mr Ryan said. It is looking for staff at all levels, he emphasised, although it is not recruiting barristers. “I think the Co-op will be an attractive place for senior lawyers to want to join and shun the equity partner route.”

Though CLS will offer services through the Co-op’s banking network, there will not be lawyers stationed in branches. The pilot in 30 branches in Bristol saw CLS hold weekly legal clinics, while Mr Ryan said video-conferencing will also be available. A lawyer will attend a branch to meet with a customer if needed.

He added that no decision has yet been taken on how to market legal services, which attract loyalty card points. As a mutual, these turn into a cash return for Co-op members and Mr Wates emphasised the open and democratic nature of the mutual model, which gives members an equal say in the direction of the business.

However, Mr Wates said he was not concerned about the risk of any brand damage caused by operating in contentious areas such as divorce and alienating people on the other side of a dispute. “We will get more kudos for taking the pain out of divorce than have a few people take against us.”

Asked whether lawyers were right to make a distinction between ‘clients’ and ‘customers’, Mr Wates said the profession has “the wrong mindset”. He explained: “People don’t want to be treated as a client. They don’t want to be talked down to or patronised. They want to be a customer.”