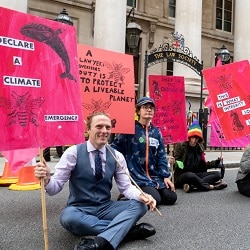 Lawyers for Extinction Rebellion (XR) blocked Chancery Lane outside the Law Society on Friday to highlight concerns about the potential impact on lawyers’ careers of being arrested for peaceful protests.

The campaigning collective put on a 12-minute play entitled ‘Countdown to extinction’, involving several lawyers in suits sitting around and working at a wooden desk in the road whilst the ‘Lawyers’ Declaration of Rebellion’, first unveiled last year, was read out.

They then changed into everyday clothes and held placards in the road.

The protest ended with countdown music, which a spokeswoman explained referred both to the “countdown to extinction, also a countdown to the end of the time judged ‘safe’ to block the road before risking arrest”.

This showed “the arbitrary nature of the line between lawful protest and arrest”, she said. There were police present but no arrests were made.

As part of their demands for the legal profession [1] to take a much more active role against climate change, Lawyers for XR want the Solicitors Regulation Authority (SRA) to confirm lawyers’ rights to engage in peaceful non-violent protest, “without fear of losing their right to practise”.

They argue that, in assessing the character and suitability of lawyers who are climate activists and have been arrested or convicted for non-violent civil disobedience, the exercise of the SRA’s discretion “must be informed” by the “climate and ecological emergency”.

In this context, they say the SRA character and suitability rule which considers more than one conviction indicative of ‘most serious’ criminal conduct leading to disqualification is “inequitable and should be revised”. 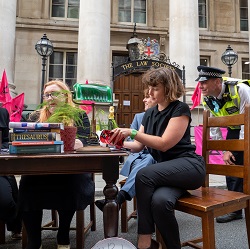 Lawyers for XR performed a 12-minute play outside the Law Society, with the police watching on

“Lawyers convicted of more than one public order offence during their continuing engagement in peaceful climate activism must not lose their jobs (or right to practise) and livelihoods for taking necessary action to avert the climate breakdown and ecological catastrophe.”

Meanwhile, the Chancery Lane Project – a collaboration of lawyers working pro bono [2] to create the legal conditions needed to achieve net-zero carbon emissions – has said that over 400 solicitors, barristers and academics from 115 different organisations have so far donated more than 5,000 hours to rewrite laws and contracts to help lawyers around the world fight climate change.

Since its foundation in July 2019, the project has released four publications: two editions of the Climate Contract Playbook, green papers of model laws, and a glossary of climate-related definitions.

Becky Clissmann, a senior editor at Thomson Reuters and a member of project’s steering committee, said: “The legal community is realising that the power to tackle climate change is in our hands and lawyers across a range of sectors are taking action by using our precedents to address climate risks in their agreements.”

The first edition of the playbook has been downloaded over 12,000 times and the recently published second edition added to the 16 original precedent clauses.

Finally, the University of Law (ULaw) has launched a ‘Change the World Fund’ [3], offering one student £5,000 and mentorship to support their idea to affect change.

It follows research among 18-25 year-olds commissioned by ULaw that found climate change top of the list of world issues they wants to address in 2020, followed by racism and poverty.

However, most said they did not have the money or expertise to do more to change the world.

Current and prospective ULaw students can submit ideas on how they can create change around a cause or business idea they are passionate about, with the winner receiving the money to invest in their initiative, as well as ongoing support and mentoring from ULaw faculty and alumni.