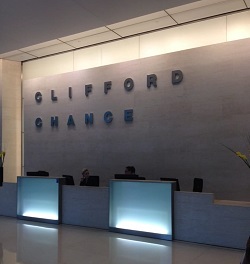 City giant Clifford Chance and partner Alexandros Panayides have agreed to pay fines of £50,000 each for conducting the infamous Excalibur case under an unlawful confidential fee agreement (CFA).

The Solicitors Regulation Authority (SRA) announced this afternoon that the Solicitors Disciplinary Tribunal had approved an ‘agreed outcome’ that means a full hearing will not be held.

The Excalibur case involved a $1.65bn claim over interests in oil fields in Kurdistan.

In dismissing it in December 2013, the trial judge, the then Mr Justice Christopher Clarke, found that the case was “grossly exaggerated”, “speculative and opportunistic”, and based on “no sound foundation in fact or law” and which ultimately met with a “resounding, indeed catastrophic, defeat”.

However, despite this and a negligence claim being settled on a confidential basis, the allegations admitted were just to do with the funding of the case.

The SRA said it had not identified breaches of the Code of Conduct in respect of the “substantive conduct of the litigation”.

The SRA said the admissions and outcome “satisfy the public interest having regard to the gravity of the matters alleged”.

A Clifford Chance spokesman said: “We take our obligations to our clients and the profession extremely seriously and are committed to upholding the highest standards at all times.

“We accept the SDT’s findings that some aspects of our conduct in this matter did not meet these high standards. The issues referred to the SDT were not prompted by any complaint but had all been identified and self-reported to the SRA by the firm following our own prompt and thorough internal review.

“We are pleased to note that the honesty and integrity of all parties is nowhere in question and that none of the original judicial criticism, which prompted the SRA investigation, is reflected in the SRA’s findings.

“While it was found that our systems and controls were appropriate, as a firm we are committed to further developing and promoting market-shaping practices in relation to ethics and professional standards.”

The Excalibur case also established significant case law on third-party funding. The judge ordered that Excalibur – which had £31.75m in finance from various funders – should pay indemnity costs subject to the Arkin cap, that is, only liable to the extent of their investment. This was upheld by the Court of Appeal.

The tribunal full ruling will be published in the coming weeks.