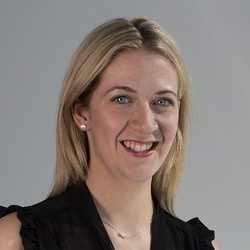 Angus: There are still a lot of people who are very scared

Clients are now more scared of robots handling their work than lawyers are of losing their jobs to machines, the boss of a legal artificial intelligence (AI) business has said.

Dr Ruth Angus, chief operating officer of Luminance, told this week’s Artificial Intelligence in Legal Services Summit in London that things “started to change” in the last year, with lower levels of fear among lawyers that their judgement would be replaced by robots.

Luminance, founded in 2016 by mathematicians and engineers from Cambridge University, describes itself as a “flexible platform” to help law firms and in-house teams manage their workload.

Dr Angus, who joined Luminance last year and has a PhD in neuroscience, said the company used machine learning to tackle due diligence in mergers and acquisitions, and was planning to expand into property, compliance and e-discovery.

She said there had been “a lot of scaremongering” about robot lawyers, but “instead of becoming robots”, lawyers could use AI to strengthen their position, turning work around more quickly and getting reliable answers from a vast amount of data.

She said machine learning was not being used by Luminance to replace the judgement of lawyers but to help them get where they wanted.

“We are using the AI we have today to make sure you are doing your job – not a robot. There are still a lot of people who are very scared.

“This has started to change in the last year. Instead of lawyers being frightened of the technology, clients are thinking: ‘I am handing over a lot of work. Are they giving it to a robot?’”

Dr Angus said technologies before AI may have taken some of the “grunt work” away from commercial lawyers, but at the cost of adding to their workload as their attention was taken away from legal work.

“It didn’t really solve a problem, just created a new one. People have spent a lot of time creating spreadsheets which can be automatically populated. I don’t think that is a vast improvement.”

Charlie Morgan, a senior dispute resolution associate at Herbert Smith Freehills, said that for him AI was “a tool like any other”, whether it was used for document drafting or legal research.

Mr Morgan said the City firm was “bombarded with requests” to use and invest in software.

He said the first step was to identify the inefficiency, then find the right technology and be able to explain how it enabled a lawyer to give the right advice, as if the documents had been manually reviewed.

Mr Morgan said it was essential to involve “from the outset” non-lawyers, who often knew more about the capabilities and limits of software than lawyers.

“Robot lawyers may be replacing some of the processes that we’re involved in, and that can be frightening, but it is also a huge opportunity.”

Lawyers needed to “change their mindset” when it came to adopting technology, but they also needed to be given time to think about how it could be used in their firms, and identify the “pinch points” where it could be brought in.

Mr Morgan said it was hard for lawyers to identify inefficiencies when they were under pressure on billing targets.

He said lawyers in the future would not need to code or design software from scratch, but would need “tech curiosity” and to understand how technology was used in legal services.

“The market will shift. As our clients become more digital in what they own and sell, we as a law firm will digitise and provide new services.

“There will be a wave of digitisation, greater reliance on data in predicting or making decisions and more collaboration between teams within law firms and law firms and their clients.”

He forecasted that smart legal contracting, and “living contracts” with built-in software would reduce the “staggering cost” of contract management processes, “narrowing the scope of disputes”, although it did not mean the end of disputes, if only because of coding bugs.