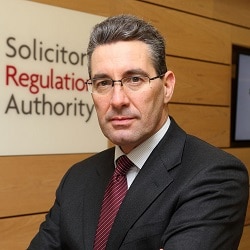 Fraud is hitting the solicitors’ profession ever harder, with tens of millions of pounds of client money lost to cybercrime and dubious investment schemes, the Solicitors Regulation Authority (SRA) has warned.

Its annual risk outlook recorded that £20m of client money has been lost to cybercrime in the past two years, while claims to the Compensation Fund by clients who have suffered losses linked to dubious investment schemes involving solicitors now total £47.4m since 2015.

In addition, the SRA said there has been a 70% jump in reports of cases of money laundering involving solicitors in a little more than a year,

It said law firms were being “increasingly targeted” by criminals seeking to steal “tens of millions from businesses and the wider public”.

Cyber security and managing certain types of claim have been added as separate priority risks for the first time this year.

In a foreword, SRA chief executive Paul Philip said the regulator was “increasingly concerned” about the practices of some personal injury firms, including those which offered to handle holiday sickness claims.

He added: “Similarly, some firms bringing payment protection insurance claims may not always be meeting the high standards we expect.”

The regulator concluded there were 10 priority risks altogether, also including access to legal services, diversity in the profession, integrity and ethics, information security, protecting client money, and standards of service.

The outlook said the most common type of cybercrime against solicitors was email modification fraud, “where criminals intercept and falsify emails between a client and the firm, leading to bank details being changed and money being lost.”

In the first quarter of 2018, 71% of all cybercrime reported by firms fell into this category.

Money laundering reports rose by over two-thirds since 2016, the outlook said, with 60 cases reported in the first quarter of 2018, up from just 36.

In the wake of the inquiry by the House of Commons’ women and equalities committee, the outlook also highlighted that solicitors “must not draft the terms of non-disclosure agreements in a way that suggests a person may not report misconduct to a regulator or a law enforcement agency or make a protected disclosure”.

Mr Philip said: “Although we know that very few solicitors would ever knowingly become involved in criminal or dishonest schemes, everyone needs to know the warning signs to look out for. It is important that law firms take steps to protect client money and information.”

Meanwhile, Anna Bradley is to succeed Enid Rowlands as the new chair of the SRA board after her three-year term comes to an end at the end of 2018.

Ms Bradley returns to the legal world having previously been chair of the Council for Licensed Conveyancers.

She is currently chair of the Zurich Financial independent governance committee, non-executive director and chair of the end-user council of the new Payments Systems Regulator (NPSO), and a trustee at Age UK. She has also previously chaired Healthwatch England.

Ms Bradley said: “Access to legal services with the high professional standards that we all expect from solicitors and law firms is fundamental to our society and communities, never more so than at a time of change for the economy and the UK.

“The SRA has worked hard under Enid’s leadership to deliver a programme of reform and modernisation that will make this important sector fit for the future. I look forward to building on that good work.”