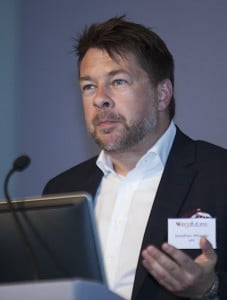 Wheeler: the work of the taskforce appears to have been hijacked by the agenda of the insurance industry

Claimant and defendant personal injury interests have clashed over this week’s report of the government-commissioned Insurance Fraud Taskforce (IFT) – while the Solicitors Regulation Authority has welcomed the call for its fining powers to be increased and the burden of proof before the Solicitors Disciplinary Tribunal lowered.

There were no claimant representatives on the taskforce, although some sat on a working group on personal injury that fed into the final report.

Jonathan Wheeler, president of the Association of Personal Injury Lawyers, was on the working group, which he described as “a welcome opportunity to discuss the topic with colleagues from the other side of the fence”, and that he would continue to do this.

He continued: “It is then all the more disappointing that the outcomes of those discussions were seemingly not taken seriously by the taskforce; that the taskforce went far beyond its remit in its approach to issues such as the small claims limit and its recommendations to effectively cut legal representation for people whose claims are brought more than six months from the date of an injury.

“Since the PI sub-group concluded its work in July 2015, I attended stakeholder meetings which left me with little confidence in the taskforce’s report being a balanced document, reflecting the views of both claimant and defendant consultees. This fear has been borne out in my reading of this final report.

“The work of the taskforce appears to have been hijacked by the agenda of the insurance industry and this government in its plans to do away with the rights of the genuinely injured to compensation.”

Sue Brown, chair of the Motor Accident Solicitors Society, which was also on the working group, added: “While the IFT considered and commented on some important issues, for example, in relation to how insurer behaviour contributes to the public mistrust of insurers, it is a pity that the opportunity to have a genuine cross-industry debate was missed as a result of the insurer bias on the main taskforce. This bias is clearly reflected in the final report.

“It is even more of a pity that the IFT’s recommendations to address fraudulent whiplash claims become irrelevant against the background of the Chancellor’s Autumn Statement which announced an intention to ignore the distinction between fraudulent claims and injured accident victims and simply exclude all those with whiplash injuries from claiming damages.”

Tom Jones, head of policy at leading claimant firm Thompsons, was blunter still: “It is the same old shroud waving. If this is a crisis, then it’s a crisis – with claims costs down 29%, record dividends, rocketing share prices and increasing premiums – that most companies would dream of.

“We are no further forward with independent analysis of the figures used to justify the ‘crisis’ headlines. The taskforce appears to have taken everything fed to it by the insurance industry at face value. The simple answer is, if it’s fraudulent, say so and don’t pay. If this is an independent report to be relied on, then Thompsons is a defendant law firm!”

On the other side, James Dalton, director of general insurance policy the Association of British Insurers, said: “We are pleased that the taskforce’s report recognises the industry’s determination to protect honest customers by clamping down on insurance fraud through the £200 million a year the industry invests in tackling this problem.

“The report highlights that the wide ranging nature of insurance fraud, including opportunistic and pre-meditated fraudsters, and in some cases rogue claims management firms and solicitors, requires different approaches and collaboration between the different agencies involved. The report rightly says that action is needed to tackle rogue claims management companies, nuisance calls and claims for noise induced hearing loss.”

Duncan Rutter, president of the Forum of Insurance Lawyers, welcomed the report. “In particular FOIL supports the aim of encouraging the public to regard insurance fraud as a criminal activity.

“We hope these recommendations will gain widespread support, including from organisations supporting claimants and that going forward both claimant and defendant bodies can work together to tackle dishonest claims.”

Martin Stockdale, partner and head of the counter-fraud unit at City law firm Kennedys, said he was pleased to see data and intelligence sharing at the heart of the recommendations, because currently access to the Claims and Underwriting Exchange (CUE) “is not total across the compensator community”

However, he also recognised that a “comprehensive assessment of consequences – intended and unintended – must take place”. He added: “The proposed legacy vehicle to implement the IFT’s recommendations must keep front and centre the understanding that fraud is inherently like water and will always find its own path. When one potential avenue of exploitation is blocked, the behaviour will adapt and seek other opportunities.”

Andy Cullwick, head of marketing at marketing collective First4Lawyers, said: “We welcome some elements of this report, including the finding that claims management companies ‘do assist people in bringing claims who would otherwise not be made and thereby play a positive role in facilitating access to justice’.

“But we are disappointed with the inflammatory language and tone used around many of the findings – with so much anecdotal evidence cited, we have to question the validity of the basis of many of these recommendations. The report borders on the speculative and fanciful in places to draw conclusions that satisfies the insurance sector and their paymasters, but does little to address the issues faced by claimants when dealing with insurers on a daily basis.”

The SRA welcomed the report and said it would work “even more closely with other agencies in a bid to crack down further on fraudulent claims”.

Chief executive Paul Philip added: “In particular, the taskforce called on the Solicitors Disciplinary Tribunal to adopt the civil standard of proof and we agree that has to be the right way forward. Alongside that, reviewing our fining powers would make the system more efficient and effective.

“We have, I think, made good progress on combating financial crime, not least in connection with the Home Office’s professional enablers scheme, along with our own anti-money laundering work. But we know we have more to do and the report will help us with that.

“We will also be carrying out a comprehensive review of the personal injury market this year and that will contribute further to our understanding.”

The question of lowering the burden of proof before the tribunal has been floating around for several years, but the tribunal itself has consistently rejected the notion, in part because it says it would require legislation to bring it about.

“There is a clear distinction between fraudulent and genuine claims. We are disappointed that this distinction is often lost… [It is] important that concerns about fraud do not result in those who have suffered genuine harm from negligence being unable to pursue their legitimate claims…

“Also, changing the burden of proof at the Solicitors Disciplinary Tribunal should not be considered lightly. The tribunal is bound by the authority of the High Court and applies the criminal burden of proof. This is considered appropriate and proportionate. We do not believe that there is any evidence that changing the standard of proof will lead to better and more just outcomes.”