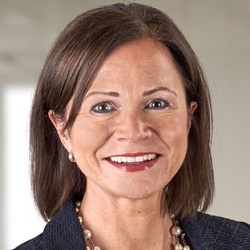 Mayhew: Joined board this month

A heavyweight City solicitor and leading Welsh in-house lawyer have been named as new members of what is now the smallest-ever board of the Solicitors Regulation Authority (SRA).

Lisa Mayhew, co-chair of Bryan Cave Leighton Paisner, joined the board on 1 January, while Nicola Williams is legal and compliance director and company secretary of Welsh Water and will join the board in September.

The board has been gradually reducing in size – it was 17-strong a decade ago and last year decided to go from 11 to nine.

Solicitor member Tony Williams’ term expires at the end of August; a one-time managing partner of Clifford Chance, he is a leading law firm consultant.

Since 2013 it has had a lay majority and this is why Ms Williams will not join until Mr Williams leaves, although until then she will participate in some board and wider events as an informal observer.

With these appointments, the SRA board will have six women and three men, the first time it has had such a female majority.

Ms Mayhew, one of only a few women at the helm of a global law firm, is an employment law specialist and a long-standing champion of inclusion and diversity in the law.

A dispute resolution lawyer, Ms Williams trained at City firm Slaughter and May and was a partner in the Cardiff office of Eversheds Sutherland before joining Welsh Water in 2012.

She is currently chair of Fair Play Trading Limited, the commercial arm of Chwarae Teg (the leading workplace equality charity in Wales) and vice-chair of Citizens Advice Rhondda Cynon Taf.

Until last year, all of the solicitor members of the board had City backgrounds.

In other SRA news, the regulator has commissioned Exeter University to look at what causes different levels of attainment for ethnic groups in professional assessments.

Its research has long highlighted a persistent ‘attainment gap’, albeit one not unique to the law – the most recent training authorisation and monitoring report showed that, while 65% of White students successfully completed the legal practice course, the pass rate for Asian students was 52% and Black students 39%.

The aim is for the research, led by Professor Greta Bosch, to help increase understanding about the factors that are driving this and to identify steps that could close the gap. The work will take until the end of 2023 to complete as it will look at a range of professional services qualifications and consider lessons from other countries and sectors.

SRA chief executive Paul Philip said: “We know that there is a longstanding picture of different outcomes for candidates from different ethnicities in legal qualifications and more widely.

“The solicitor profession needs to reflect the diverse society that it serves so we want to know why and what the barriers are. This research is the first part in that process.

Separately, Gerry Walsh has started work as the new interim chief executive of the Law Society following the departure of Paul Tennant.

A procurement specialist who has worked at a host of leading consumer brands, he was procurement director of the London organising committee for the 2012 Olympics and Paralympics and former interim chief executive of the Chartered Institute of Procurement and Supply.