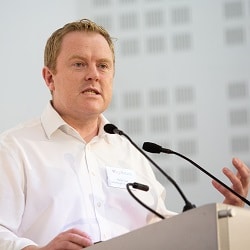 The aim is for Wavelength – which has a 30-strong multi-disciplinary team of lawyers, data scientists, designers and technologists – to introduce new services and solutions for Simmons’ clients globally.

The firm’s tagline is that it uses data engineering and creative design “to deliver positive change in the legal sector” – for law firms, in-house legal departments and companies more broadly.

It launched in 2016 with co-founders Peter Lee and Drew Winlaw as majority owners, with a small number of individual investors too.

Jeremy Hoyland, managing partner of Simmons & Simmons, told Legal Futures that it was “easier to buy than build” the type of expertise Wavelength offered.

He said: “There’s a real shortage of talent in this area and if you try and build it organically, the chances of getting it wrong are pretty high.

“Rather than being interested amateurs, we’d rather work with the professionals… We see this as a real opportunity to have a better offering than our competitors, in an area that is increasingly important to our clients.”

Wavelength co-founder and chief executive Peter Lee said that, as a first mover, the firm had found “the total addressable market” to be “huge”.

“We were always clear that at some point would need a bigger platform in order to realise the opportunity.”

He said the two firms have been working together for over a year, and the deal would provide what will now be called Simmons Wavelength – still based in Cambridge and London – “many more sales channels”, as well as scale and access to working capital.

Mr Hoyland indicated that trainees could have the opportunity to complete one of their seats with Wavelength, while more senior lawyers will also be seconded there.

He said the multi-disciplinary offering was “the direction of travel for premium work and clients, particularly around data”, adding: “All of our competitors are trying to find ways to improve their offering in this area. Through the Wavelength team we’ve got better capabilities than those other firms but they are actively engaged in trying to improve their own capabilities and in time I’m sure they will.”