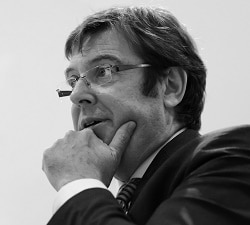 Bones: New structure has much to commend it

Professor Chris Bones has been named the first chair of the CILEx Group as the Chartered Institute of Legal Executives presses ahead with its major governance restructuring.

He has experience in the private, public and third sectors, working in senior HR roles before becoming the first non-academic dean of Henley Business School.

He is currently co-founder and chair of Good Growth Ltd, a digital services company that works with some of the country’s biggest retail names, professor of creativity and leadership at Manchester Business School, and non-executive director of MK-LF Partnership, which helps companies develop their senior female talent.

Former roles including chairing of the trustee board of the Terence Higgins Trust, and of the supervisory board of AIESEC, the world’s largest non-profit youth-run organisation. He also spent five years on the Government Skills Management Board.

The CILEx Group board will be at the apex of CILEx’s new governance structure, the aim of which is to separate out its duties to the public interest, the profession and independent regulation.

The board, with an independent chair, will have an overarching duty to the public interest. It will be charged also with protecting CILEx’s Royal Charter and its reputation.

Underneath will be the boards of each CILEx company: CILEx Professional, dedicated to promoting the profession’s interests; CILEx Law School, delivering legal education; and Group Services, providing business infrastructure to all parts of the group. CILEx Regulation will continue to have its own independent board.

CILEx president Millie Grant said: “Our governance reforms are driven primarily by a desire to embed best practice within the organisation and ensure its operation is transparent and promotes good decision making.

“CILEx is a multi-faceted organisation and in Chris, I believe we have a person with all the right skills to ensure these goals are met. CILEx intends to lead the way in good governance in the legal sector, and Chris’s appointment is a critical step towards that goal.”

Professor Bones said: “The new governance structure has a great deal to commend it and the challenge to take it from the page to reality appealed to me a great deal.”

Meanwhile, Andrew Walker QC of Maitland Chambers has formally taken over as chairman of the Bar Council.

Mr Walker called in 1991 and took silk in 2011. His professional practice is focused on property, company and commercial disputes and professional negligence claims. He awarded the Bar Pro Bono Award in 2009 for some of his work with the homelessness charity, Shelter.

In his inaugural speech late last year, Mr Walker said the decision of the Bar Standards Board to withdraw from the Quality Assurance Scheme for Advocates could be a “turning point” in the regulation of barristers.

He called for a “proper dialogue” between the Bar Council and the Bar’s regulators based on “respect, understanding, discussion and persuasion” rather than “diktat, coercion or constricted formality”.

A few weeks earlier, he warned that the lack of young barristers has become so acute that it could spell the end of a “sustainable, separate profession”.