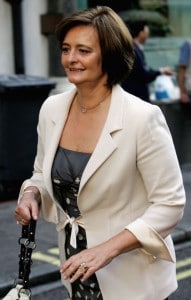 Cherie Blair QC is to throw herself into her work with her alternative business structure (ABS) Omnia Strategy after leaving Matrix Chambers, which she co-founded 14 years ago.

Omnia describes itself as a “pioneering international law firm that provides strategic counsel to governments, corporates and private clients”. It was granted an ABS licence by the Solicitors Regulation Authority in December 2012.

It has three directors: Mrs Blair, who is the chair; dual US/English-qualified solicitor Julia Hulme, the head of legal practice; and US lawyer Roxana Pierce, who heads Omnia’s Washington DC office.

Peter Wilson, an economist and governance expert who is still named on the SRA’s ABS register as its head of finance and administration and listed as a manager on the Law Society’s Find A Solicitor website, is “not part of Omnia Strategy”, the firm told Legal Futures today. His LinkedIn profile says he left in February 2013.

It has four other English-qualified lawyers and a law graduate, together with a communications specialist, listed on its website, along with an advisory council whose members include ex-Attorney General Baroness Scotland QC, former Court of Appeal judge Sir Henry Brooke, Professor Jeffrey Golden – who created Allen & Overy’s US practice – and William Neukom, who was Microsoft’s lead lawyer for nearly 25 years and is a former president of the American Bar Association.

Press reports have suggested that Omnia has been active in Africa, advising in countries such as Nigeria, Ghana, Gabon and Cameroon.

Mrs Blair said: “It has been a privilege to be part of the team at Matrix for the last 14 years, and to have been able to develop my practice alongside so many first-class, dedicated colleagues.

“But Omnia Strategy was born from a recognition that clients often wanted more than legal solutions to complex problems, and what makes Omnia unique is the holistic and strategic approach that we offer to clients who are facing complex issues where matters of law, business, policy and communications all overlap.”

Rhodri Thompson QC, chair of Matrix’s management committee and another founder member said: “We are of course sad to see one of our original leaders leave the organisation that she helped to create. Since then, Matrix has established an outstanding reputation both domestically and in an increasingly global legal market – we look forward to watching Cherie’s new venture develop while continuing to build our own unique brand.”