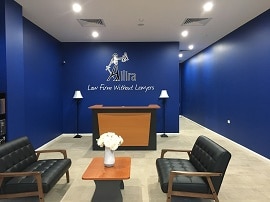 A lawyer has launched an artificial intelligence-backed (AI) chatbot that powers what he calls the ‘Law Firm Without Lawyers’, initially aimed at consumer and tax law but shortly to be extended to domestic violence.

The Australian creator, Adrian Cartland, a tax specialist who runs Cartland Law [1], in Adelaide, South Australia, told Legal Futures that he hopes to bring it to the UK.

He has taken the chatbot he built, Ailira – short for Artificially Intelligent Legal Information Resource Assistant – to the public in dedicated space in a shopping centre in a rural area near Darwin in the north of the country.

Shoppers can buy wills and other consumer and commercial legal documents by sitting in front of a screen and typing on a keyboard, supported by human assistants and, where necessary, a lawyer, who can be accessed remotely in the Adelaide office.

Mr Cartland said Ailira was similar to Siri, Apple’s iPhone AI personal assistant, “but with a focused and deep understanding of the law”. Like Siri it could ask and answer questions, performing both as a ‘decision-tree chatbot’ and one with natural language capabilities.

He gave the example of an interaction during a will preparation where an executor was chosen. Through a process of Ailiri questioning and answering, the client decided she was happy for her son to be the executor.

Ailira automated both legal advice and legal research, he said. The research element focused on tax and “searching through the private files of firms” and was launched in beta in March 2016, before going live nine months later.

He was “working with a number of partners in Australia and in other countries” and was keen to bring the chatbot to the UK.

As proof of Ailira’s abilities, he said his girlfriend Sarah, a non-lawyer with no experience in the tax industry, had passed a university tax law exam with only “some minor coaching” and Ailira, with a 73% pass mark.

He explained he had built the chatbot with a team of developers, using both supervised and unsupervised machine learning, together with “a number of third-party integrations” such as the IBM Watson Conversation chat platform and others including those covering payments and customer monitoring.

He said next steps for the chatbot included “fence disputes [and] bail applications”.

He had also started developing the tax research aspect of the chatbot by “expanding into general case law, patents, and we have a recently discovered special usefulness in searching through court transcripts with our unique method of NLP [natural language processing] searching”.

Last year Mr Cartland won funding from the South Australia government to develop the chatbot to help victims to report domestic violence. He has continued to fund the work himself and expected “to roll out at the end of [2017]”.

The lawyer insisted that AI tools would not lead to jobs being lost in the legal industry, but would begin to configure legal jobs differently.

“For example, the Law Firm Without Lawyers hired three new law graduates to service a practice that didn’t previously exist.”

Mr Cartland went on: “I am a tax lawyer by trade, and deeply love the practice of law.

“Part of this is automating repetitive and costly tasks such as legal research. Another part is providing access to justice to the people who are least able to afford it.”

Last week the creator of the DoNotPay chatbot, Joshua Browder, told the Legal Futures conference in London [2] that he expected the use of chatbots in the law to proliferate.