“Chaotic” solicitor struck off after 45 years in practice 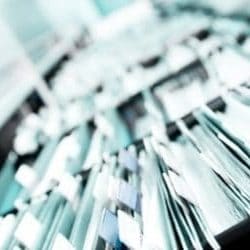 Files: Some suffered from flood damage

An experienced sole practitioner has been struck off for a litany of failures which showed “chaos and disorganisation” in his practice and included the dishonest under-valuation of estate assets of nearly £50,000.

Also dishonest was a false declaration to his insurer, the Solicitors Disciplinary Tribunal (SDT) found.

Accounting errors were said to affect nearly 40 matters and in a similar number money was held in client account and there had been no activity for a year.

Amid the chaos, other alleged breaches included the failure to register titles, pay fees or tax, or inform clients of such failures, and inappropriately paying a co-executor out of estate funds.

Richard Stephen Davies denied dishonesty. But he admitted he was “old and tired”, maybe “dazed and confused”, and claimed he knew he was “becoming unwell”.

He told the tribunal that he had been hoping for a “quiet and gentle closure of the practice before long”.

The solicitor, who did not attend the hearing last month, was admitted in 1973 and from 1987 ran his firm in Mold, Wales, doing mainly probate and conveyancing work. He had one part-time non-solicitor assistant.

His misconduct came to light in 2018 when the firm’s accountant’s report was qualified.

He took a further £6,500 from the estate around two years after the final accounts were sent to beneficiaries without raising a bill, and gave £5,000 to a co-executor on account because he was going on holiday, despite initially saying the money was to pay for work to a property before it was sold.

The tribunal noted the solicitor could not explain the errors but said: “If you were to come into my office you would see ‘Thank You’ cards amounting to nearly 100.”

He claimed in that case there was “no dishonesty involved” and that the family of the deceased had not complained.

However, the tribunal said: “He knew he was taking costs in excess of what the beneficiaries had been advised and he failed to account to them for what he had taken. The tribunal considered that ordinary, decent people would consider this to be dishonest.”

The tribunal found it proven that in 2017 he had dishonestly failed to tell his insurer that complaints to the Legal Ombudsman were outstanding against him, including one that he had failed to register title to a property.

It said: “The public would expect a solicitor to be completely open with his insurer and the failure also constituted a failure to maintain public confidence in both the respondent and the provision of legal services.”

Failure to register title on up to 17 properties, or pay stamp duty, were among a category of allegations. Mr Davies cited “an enormous backlog” as one of the reasons for this.

The first several clients knew was when they received non-payment notifications, even though they had paid the solicitor in full years earlier.

Confronted with these lapses, the solicitor claimed there would have been money available to pay to rectify any problems.

He added that he had not grown up with IT and so “from time to time, had difficulty in remembering or finding the passwords needed to access HM Revenue & Customs in order to deal instantly with stamp duty land tax”.

The tribunal concluded that Mr Davies had retained clients’ money in some cases for years and done nothing with it, although it had been collected for the specific purpose of discharging stamp duty land tax and Land Registry fees.

“This conduct exhibits a serious failure of adherence to the ethical standards of the respondent’s own profession.”

Investigations identified 37 matters with accounting errors and 43 where money was held in client account but there had been no activity for a year.

In relation to one estate, the solicitor held more than £14,000 for over seven years without justification.

The tribunal said: “It was clear that the respondent had failed to run his business effectively… and that [this] would undermine the trust of the public in him and in the provision of legal services.”

Explaining how he had become overwhelmed, Mr Davies told the investigating officer: “Because there are so many files ongoing… it can be quite hard to find one. And then something will happen, or the telephone will ring, and we have to abandon it and then start again much later.”

Some of the files were stored in an attic and others in a cellar. Because of roof leaks and flooding, some were damaged.

It emerged that Mr Davies had appeared before the tribunal once before, in the late 1980s, being fined £350 plus costs for unreasonable delays, mainly with correspondence with a lender and the then solicitors’ complaints authorities.

Assessing sanction, the tribunal found his motivation for the misconduct was “to hold or take money to which he was not entitled” and that while there was some planning, there was also “chaos and disorganisation”.

Conveyancing clients had suffered stress due to delays in paying taxes or fees, and finding their titles were not registered.

Harm had been caused to the profession and “elements of the misconduct were deliberate, and calculated and repeated and they continued over a period of time”, it found.

It continued: “He should have known that what he did was in material breach of his obligations to protect the public and the reputation of the legal profession.”

The tribunal said striking off was inevitable and also ordered Mr Davies to pay costs of £35,200.