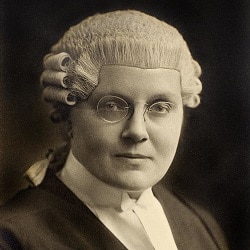 Normanton: First woman to join an Inn of Court

The first set to be named after a woman in the history of the Bar is to honour one of the first two female King’s Counsel, as they then were, it has emerged.

218 Strand Chambers in London – which claims to be the closest set of chambers to the Royal Courts of Justice – is to change its name to Normanton Chambers in January.

Helena Normanton KC was the first woman to join an Inn of Court, Middle Temple, on Christmas Eve 1919, and in November 1922 became was the second woman to be called to the Bar, after Ivy Williams, and the first actually to practise.

In a letter yesterday to the Daily Telegraph, the joint head of 218 Strand Chambers, Andrea Barnes, described Ms Normanton as “a pioneer and a rule changer” who went to have “a remarkable career opening doors that many thought were firmly closed”.

Ms Barnes expressed her hope “that we can continue with her quest for a diverse, egalitarian and culturally rich Bar”.

218 Strand Chambers launched at the start of this year; it has nine members, including its newly recruited first pupil.

The 218 Strand building has until now been best known as the home of mediation, as it houses the Society of Mediators, the Free Mediation Project, the National Mediation Centre and others.

The chairman of the Society of Mediators is Jonathan Dingle, who is the other co-head of the chambers. He was the founder too of the Civil Mediation Council.

According to a profile on The First 100 Years website, Ms Normanton’s first application to be admitted to Middle Temple was actually declined in 1918. She lodged a petition at the House of Lords, but before the hearing, the Sex Disqualification (Removal) Act 1919 was passed, allowing women to enter the legal profession.

Within 48 hours of the Act becoming law, she made her successful application.

As the first practising woman barrister, Ms Normanton forged a career that featured several firsts: the first female counsel in High Court cases, the first woman to obtain a divorce for a client, and – along with Rose Heilbron – the first female King’s Counsel in England and Wales.

“Throughout her life, Normanton campaigned for women’s rights and women’s suffrage,” the profile said.

“She was the first married woman in Britain to have a passport in her maiden name and believed that men and women should keep their money and property separately.”

In her first application to Middle Temple, Ms Normanton wrote: “I believe that the sex-exclusiveness of the legal profession is doomed. Women won’t stand it, and men, who have been learning a great deal lately about women’s capabilities, will not tolerate it either.”