Chambers teams up with law school for advocacy module 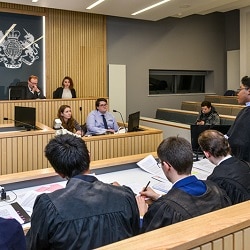 Barristers from Exchange Chambers have teamed up with Lancaster University Law School to develop and deliver an undergraduate advocacy module for students.

It will offer both academic and practical training in advocacy, along with lessons on courtroom “craft”.

The third-year undergraduate module has just started and will run throughout the 2019/20 academic year.

The academic training will be led by law lecturer Dr Cerian Griffiths, with members of the Manchester, Liverpool and Leeds set – including John R Jones QC and William Waldron QC – delivering practical sessions and workshops on a variety of advocacy related topics.

The law school has a mock courtroom named after Bruce Sewell, a graduate of Lancaster University who went on to be general counsel of Apple in the US and made a “generous” donation to help fund its creation.

Professor Alisdair Gillespie, head of the law school, said: “This is an exciting project which promotes and reflects Lancaster Law School’s dedication to the future employability of our students.

“It is practical courses such as the advocacy module which contribute to Lancaster Law School being the best in the country for employability of law students.”

According to The Times and The Sunday Times Good University Guide 2020, Lancaster topped the table for graduate prospects in law, meaning that it had a higher proportion of 2017 law graduates in professional jobs or graduate-level study than any other university in the country.

This was even though it ranked as having the 22nd best law degree.

It is the latest education push by Exchange Chambers, which launched a pupillage academy earlier this year ahead of taking on six pupils in September 2020, twice its usual number and what it described as “one of the largest ever annual intakes of pupils by a barristers’ chambers”.

They are each being mentored by juniors at the set until they join.

Head of chambers Bill Braithwaite QC said at the time: “The launch of a pupillage academy – in effect, a national centre of excellence for aspiring barristers – marks our commitment to the future of chambers and our confidence in the future of the Bar.

“While our pupillage academy represents a significant upfront investment, it is an investment in the future of chambers.

“The object is to encourage students at school and university, mentor those who are keen, help with the application process, provide a first-class pupillage and mentor new tenants for the first three years of tenancy.”