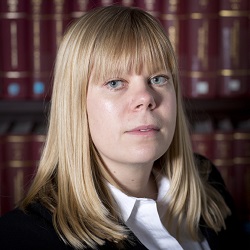 Clement: Six months not enough to get earnings back

A London chambers has decided to give barristers returning from parental leave a year’s holiday from making any payments in terms of rent or other contributions and expenses.

Ms Clement said there was a “massive issue” at Bar with retention of female barristers of around 15 years’ call, which explained why “historically silks have been so male-dominated”.

She said the new policy at 11KBW, “one of the best in the Bar”, was introduced last week, replacing the previous position where returning barristers received a six-month holiday.

“Employed lawyers can come back from maternity leave and immediately get paid again. At the Bar that’s not the case. It can take time − in some cases a very long period of time.”

She said 11KBW always had a generous maternity leave policy, with barristers not needing to make contributions to chambers from the day leave began.

“We discovered in recent years that six months was not enough time to get your earnings back, bearing in mind the maternity costs you have to pay to work in the first place, so we doubled it to 12 months.”

The new policy applies to barristers who take full parental leave, stopping work for reasons relating to pregnancy or childbirth, or taking full-time responsibility for looking after a child.

No chambers contributions, rent or expenses are payable by a member during the period of leave.

To qualify, they must have taken at least six months of full parental leave.

There is an upper earnings cap. Once a member has been paid £250,000 in income during the 12 months after they return, the holiday ceases.

She returned to chambers full-time in September 2019, not long before the pandemic struck and home schooling began. Her husband was able to work flexibly, so she worked for four days during the working week and then again on Saturdays.

“I think that everyone who had to do home schooling deserves a medal. It very much depends on your home set-up. I could not have put in the QC application without support from my husband.”

Ms Clement said she was also helped by the fact the Administrative Court, where she does most of her work, “went remote very quickly” and hearings continued “at the same pace that they had before, which is what you need to become a QC”. She applied for silk in March last year.

She advised female barristers to “think about applying for silk a number of years in advance”, which would help them “get over the impostor feeling that women have”. They should “be prepared to apply before they’re ready to accept”.

Ms Clement said the much higher success rate for women barristers in the latest round of QC appointments indicated that they waited longer before applying.

She described the fact that 45% of successful candidates were female as a “brilliant statistic”, which she “very much hoped would continue”.