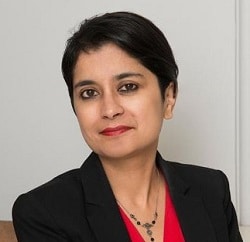 It is time to consider “targeted and time-limited affirmation action” to deliver a significant increase in the number of women in the senior judiciary, the Shadow Attorney General has argued.

Baroness Chakrabarti, the barrister who used to head Liberty, said she had seen “the enormous catalysing effect” such measures can have.

Writing on the Bar Council’s website, the Labour peer asked how it was that after 90 years of women’s suffrage – “Not 100, don’t believe the hype: in 1918 working-class women were deliberately excluded” – and nearly 50 years of equal pay legislation in the UK, “financial, social, professional and political equality between the sexes is still so apparently far from reach”.

First she argued that equality laws needed greater teeth. “It is fanciful to place the burden of policing equal pay law on individual women, especially when they are denied access to legal services and so many employers elude any semblance of transparency in relation to pay.

“State agencies audit and enforce both corporate governance and tax collection. It seems to me that it’s high time for similar powers in relation to pay parity as well.”

Baroness Chakrabati went on that she had also seen “the enormous catalysing effect of targeted and time-limited affirmation action methods to improve the representation of women”.

She explained: “As a result of the use of all-women shortlists, the Labour Party has more women MPs than all other political parties combined and we have a wholly reasonable and attainable target of achieving 50% at the next General Election whenever it comes.

“I believe it may be time for legislative change to enable similar measures in highly segregated areas of the workforce. I think much good could come from more young male primary school teachers, more ethnically diverse police services and yes, from more women in our corporate boardrooms and senior judiciary.”

The peer said she had no doubt that men could do justice for women. “It was after all a male-dominated judiciary, and not a female-led government, that finally outlawed marital rape in our country only three decades ago.

“Nonetheless, more diverse experience will enhance our most precious institutions, encourage public trust and protect the rule of law from the ‘enemies of the people’ cynicism that prefers the law of the oligarch and the mob.”