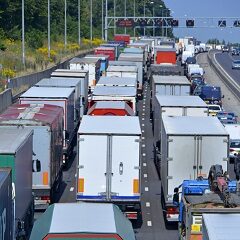 The Competition Appeal Tribunal (CAT) yesterday chose an opt-in collective action over an opt-out to pursue a multi-billion pound claim over a cartel that controlled the cost of trucks over 14 years.

The CAT was originally set to make this decision back in May 2019 but it was adjourned pending the resolution of what became the landmark Mastercard case by the Supreme Court in December 2020.

This unblocked the regime and other collective proceedings orders (CPOs) have since been made – but this is the first that is completely opt-in.

The trucks claim follows a decision by the European Commission to fine MAN, Volvo Group, Daimler, Iveco and DAF nearly €3bn (£2.6bn) for price fixing and other cartel activities between 1997 and 2011.

There were several differences between the two applications, most notably that UKTC’s was on an opt-out basis and only for new trucks, whereas the RHA’s was opt-in and also covered used trucks.

Damages could be many thousands of pounds per truck, and hundreds of thousands of trucks are potentially affected.

The RHA already has over 18,000 claimants signed up and registered. It has backing from third-party litigation funder Therium and after-the-event insurance.

The CAT held that both claims were in principle eligible and suitable for inclusion in collective proceedings but rejected the idea of approving them both.

“One of the significant benefits of collective proceedings is efficiency both for the parties and for the tribunal,” it said.

“If there were two, overlapping collective actions, they would clearly have to be heard together, which would very substantially increase the cost and complexity of the proceedings generally and the trial in particular.”

It would also be “very confusing” for potential class members.

The CAT came to the “very clear” conclusion that the RHA proceedings were preferable, even if UKTC’s were pursued on an opt-in basis. It noted the size of the RHA’s membership and that it has been able to reach out effectively to non-members too.

It had more confidence in how the RHA expert proposed to calculate loss; more significantly, the tribunal said, opt-in proceedings would give the expert access to a significant volume of data from the class members.

Therium’s take from the damages will depend on how much is recovered – if total damages reach £3bn, the funder will take 6% and this figure increases (eg, 8% if £2bn is awarded) to the point where it will take a maximum of 30% if no more than £150m is recovered.

Backhouse Jones director Steven Meyerhoff said: “This judgment, in which the RHA has succeeded on almost every single point – despite the truck manufacturers’ attempts to derail the action – demonstrates that the CAT’s opt-in regime is very much suited for well thought-out applications on behalf of large and small businesses seeking redress for anti-competitive behaviour.”

The number of CPOs being made is increasing. Last month, the CAT authorised consumer group Which? to bring a £480m claim against tech giant Qualcomm that around 29 million people were overcharged for their smartphones (individual damages are estimated at £16-17).

Which? argues that Qualcomm breached competition law by taking advantage of its dominance in the patent-licensing and chipset markets, meaning it could charge manufacturers like Apple and Samsung inflated fees for technology licences.

The CAT granted the CPO on an opt-out basis for those of the class domiciled in the UK and opt-in for those outside the UK.

Hausfeld also reported last month that, in a first, Dr Rachael Kent’s claim against Apple concerning fees levied in its App Store was certified for a CPO “on the spot”.

She now represents a UK class comprising nearly 20 million Apple mobile device users who have suffered aggregate losses of between £621m and £1.7bn.

The claim is funded by Vannin Capital and also has after-the-event insurance. Mark Hoskins QC, Jennifer MacLeod and Aaron Khan of Brick Court and Ronit Kreisberger QC of Monckton Chambers have been instructed.

Finally, Mishcon de Reya has refiled a representative action brought by Andrew Prismall on behalf of approximately 1.6 million individuals against Google and DeepMind Technologies for the unlawful use of patients’ confidential medical records.

The claim is for the misuse of private information and arises out of an arrangement formed in 2015 between Google and DeepMind and the Royal Free London NHS Foundation Trust. Mishcon said the tech companies obtained and used a substantial number of confidential medical records without patients’ knowledge or consent.

The original proceedings were discontinued in February. The reasons for this have not been explained. The action is funded by Litigation Capital Management.