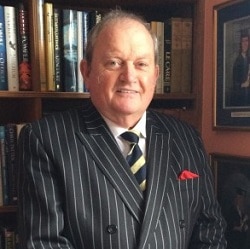 The Solicitors Regulation Authority (SRA) needs to be more rigorous pursuing “bent” solicitors abusing the immigration system, and the regulator’s approach may reveal “lax leadership”, according to a former judge.

The SRA rejected the accusation and said it had a proven track record of prosecuting solicitors accused of misleading in immigration cases, with “more in the pipeline”.

Solicitor James Hanratty was an immigration judge until he retired in 2014 and was president of the Council of Immigration Judges. In 2016 he published a book, The making of an immigration judge. He is a member of the advisory council of the sometimes controversial MigrationWatch think tank.

Mr Hanratty has received some publicity for comments made at literary festivals. Speaking to Legal Futures, he said: “There is an industry out there of people traffickers, agents and bent lawyers taking advantage of the system.”

He added: “The SRA must be rigorous in investigating and if necessary striking off any solicitor engaged in unlawful and even criminal practices. The financial penalties must also be severe.”

He gave the example of a case in which a Somali woman appeared before him claiming she had been forced to flee Somalia because warlords had killed her husband. But it turned out that her husband had claimed asylum in the UK 18 months earlier.

He said the solicitors had acted for both so were complicit in the deception. The judge had complained to the SRA but heard nothing. When he followed it up months later, he was told that the case had been dropped because the Somali woman had disappeared.

He said he had sent the SRA his detailed determination so no further investigation was necessary.

Mr Hanratty went on: “A much more determined and rigorous approach is needed from the SRA. The leadership there may be too lax.”

He said the solution was “unannounced inspections of suspect firms and prompt action before the Solicitors Disciplinary Tribunal (SDT).

“Where the firm is not criminal but just incompetent, training should be given.”

He expressed scepticism that the SRA referred cases involving unlawful practices to the police and said he had not seen much evidence of it.

An SRA spokesman said that, in the past 18 months, three solicitors had been taken to the SDT for misconduct in immigration cases, with two being struck off and the third suspended indefinitely.

He added that any complaints from the judiciary were taken seriously and it appeared that the SRA had no record of Mr Hanratty’s original complaint.

The regulator had “a proven track record of taking action” when it was supplied with evidence by the judiciary, he said. More cases were “in the pipeline”.

Serving judges have been outspoken about the conduct of immigration lawyers recently. Last year lawyers were accused of repeatedly making unmeritorious requests for adjournment [1] and earlier this year immigration solicitors were castigated for playing the system [2].