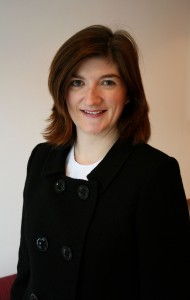 Equal pay and a change in culture that makes women feel “comfortable in the working environment” are the keys to ensuring a “truly fair, equal, and diverse legal profession”, a cabinet minister who used to be a City solicitor has argued.

Nicky Morgan, the education secretary who is also minister for women and equalities, praised the “real progress” that female solicitors had made in the profession, and also the growing numbers of women on the bench – as well as the skills a legal qualification provided that had helped her in Parliament.

But in a speech to Leicestershire Law Society last week, she said “sadly I can’t give the impression that all is well”, pointing to a recent study showed female lawyers earn a third less than their male counterparts on average. “That’s an astonishingly large difference.”

Ms Morgan continued: “I think there are two main areas we need to address if we’re to achieve a truly fair, equal, and diverse legal profession in this country.

“First, in material terms, we need to make sure that women are being rewarded equally for their hard work. There simply cannot be any excuses for paying anyone less because of their background or their gender. And there can be no excuses for policies that disadvantage women with families or other caring commitments.

“But just as important is a change in culture. Pay women as much as you like, but if they don’t feel comfortable in the working environment, we’ve only fixed half the problem.”

She said there needed to be a working culture that recognises success “comes from more than nine-to-five working, from shouting the loudest, or from hiring certain groups of people from certain backgrounds”.

Flexible working should become the “new norm”, and women should be supported to climb the corporate ladder. Similarly, a career break for having children should not knock female lawyers “back down after years of hard work”.

While highlighting the role of the government in teaching employability skills and making good careers advice available, she also called for more firms to consider creating professional support lawyer roles such as she had at Travers Smith before being elected in 2010.

“I think the legal profession deserves a lot of credit for developing a role which allows men and women to take contact with clients and lawyers, and also allows them to work fixed hours and part time hours, and I talk about this at every opportunity.

“And I hope some of the firms in this room will bear this in mind; if you haven’t got a professional support lawyer role that you consider doing so, in order to keep your brightest and best engaged at a time when they have other commitments.”

There was also work to do on social mobility, Ms Morgan said. “Roughly 7% of the population in England and Wales attend a fee-paying school. But the proportion of privately educated magic circle firm partners is over 10 times that. There’s no reason that the top jobs in the top firms should remain an enclave for the privileged few.”