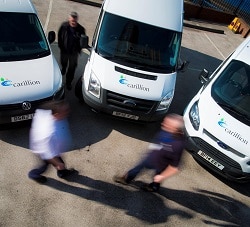 The Ministry of Justice (MoJ) has said it was “business as usual” on the housing and debt legal aid phone lines operated by Carillion Advice Services (CAS) yesterday, following the collapse of the parent company.

Former justice secretary David Lidington, now minister for the Cabinet Office, announced that the government would continue to deliver all public sector services following the insolvency of Carillion PLC.

A spokesman for the MoJ told Legal Futures that the CAS contract with the Legal Aid Agency was “still in place” and was business was “continuing as usual”.

CAS, which employs 60 paralegals in Newcastle and 10 in Birmingham, marketed itself as a paralegal-led managed legal services centre employing mainly law graduates, often those who have passed the legal practice course.

Its website said: “We not only manage your routine, low to medium complexity work, from confidentiality agreements to legal research, but we can support you on larger projects.”

CAS works with Carillion’s in-house legal team and also its panel law firms. Just last year, it was ‘highly commended’ in the Financial Times’ Innovative Lawyer awards and shortlisted for a Law Society Excellence Award. It also has the Law Society’s Lexcel accreditation.

It lists having worked with the likes of Vodafone, Santander and City law firm Slaughter and May.

Clarkslegal, a law firm based in Reading, has a partnership with CAS to provide clients with a “cost-effective solution in relation to more routine legal services”, with the firm offering the premium services.

The firm declined to comment on the future of the relationship.

CAS had applied to the Solicitors Regulation Authority (SRA) for an alternative business structure licence.

A spokesman for the SRA would not comment on when the licence application was made or how far it had got, for reasons of confidentiality.

“In terms of withdrawn applications and cost, they are dealt with on a case-by-case basis.

“Were the applicant to go into liquidation during the process and costs were owed, then we would be added to the list of creditors by the appointed administrators.”

The Cabinet Office said Carillion held approximately 450 contracts with the government, representing 38% of its 2016 revenue, in particular with the departments of education, health, transport and defence and the MoJ.