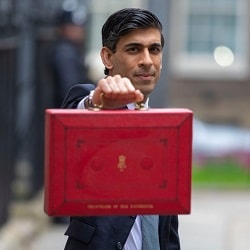 Mr Sunak announced in the Budget yesterday that the £500,000 nil-rate band will now end on 30 June, rather than 31 March.

Then, “to smooth the transition back to normal”, the nil rate band will be £250,000, double its standard level, until the end of September.

He said: “The cut in stamp duty has helped hundreds of thousands of people buy a home and supported the economy at a critical time. But due to the sheer volume of transactions we’re seeing, many new purchases won’t complete in time for the end of March.”

According to Rightmove, there are an estimated 628,000 sales still currently going through the legal process across the UK and the extension would make a “big difference” to those home-movers.

The property portal said its data showed that one in five sales that were agreed last July, when the holiday was first announced, still have not completed.

Its data expert Tim Bannister added: “Buyers who have recently agreed a sale now have a race on their hands to see if they can also make use of the stamp duty savings, but many with purchases over £250,000 will find that time is too tight to complete before the end of June and so shouldn’t be factoring this into their purchase.”

Estate agents in particular have strongly welcomed the Chancellor’s decision.

The Conveyancing Association, Bold Legal Group and Society of Licensed Conveyancers had last week urged Mr Sunak not to extend the holiday, and instead give buyers who had instructed a lawyer by a certain date a year to complete.

Paul Smee, non-executive chair of the Conveyancing Association, said yesterday he was pleased the Chancellor was not bringing the relief to an “abrupt” conclusion this month.

“A tapered reduction to the relief which we have long advocated will help avoid cliff edges in October. The conveyancing sector does however face real challenges in meeting the likely volumes of transactions over the next few months but is ready to rise to the challenge.”

Law Society president David Greene said buyers and sellers would “breathe a sigh of relief”, and the reduced concession from July to September would “help to reduce the risk of a future cliff edge for consumers”.

He added: “Nonetheless, the design of the extension and tapering of the holiday could encourage consumers to begin new transactions in the expectation of benefitting from the scheme, so the government should remain vigilant to ensure fairness, stability and confidence in the market as the holiday comes to an end.”

David Parton, a partner and head of conveyancing at Shoosmiths, said the move may be welcome in some quarters “but in a very real sense it introduces further cliff edge events to the residential property market”.

He explained: “In common with most conveyancing firms, Shoosmiths has found itself overrun with instructions with buyers falling over each other to beat the stamp duty relief end date of 31 March whilst seeking to help our clients in the midst of lockdown.”

In addition to the 30 June and 30 September cliff edges, there were clients already targeting what was 31 March deadline, “fixed now in their minds that they would be moving imminently”.

Removing all relief at the end of September “is likely to take the wind out of the market’s sails entirely as we enter the autumn, flattening the market for six months before the customary spring resurgence”.

Mr Parton went on: “What’s clear is that those who actually project manage the conveyancing and lending work that arises from transactions agreed are now faced with a difficult year.

“How immediately to react and give a client an estimate of the expenses to budget for against this backdrop when embarking on a transaction is likely to become even more difficult, with three variable rates depending upon the date of completion in 2021 to account on top of complexities depending upon the status of the buyer with different rules for the first-time buyer, property investor or company purchaser and whether the buyer is UK-resident.”

Jeremy Raj, national head of residential property at Irwin Mitchell, said: “The announcement is more generous than had been trailed, but still leaves a cliff-edge for many buyers.

“The property sector is already groaning under the pressure of the stamp duty holiday, which will only worsen as transactions pick up again, bolstered by this new extension.

Clare Hallett, head of residential property at Bournemouth firm Frettens, said she hoped the change “will be sufficient to ensure a buoyant but realistic property market”.

She added: “Many expected the number of sales to slow significantly in the run-up to the deadline, however we have not seen that locally. We have seen a large number of instructions in the first few weeks of 2021, very few if any of which are dependent on a completion before the deadline.”

Dr Tom Quirke, managing director of SearchFlow, said that while buyers would welcome the extension, the “exceptional levels” of work conveyancers have faced were likely to continue for some time.

“The industry has to continue digging deep, innovating and adapting, where possible, to meet the deadline,” he said.

Andy Sommerville, director of Search Acumen, said the extension was a “tonic for thousands of conveyancers who have been under pressure to complete due diligence on an industrial scale against a pressing deadline, and risking burnout at a time when businesses are still under government instructions to work from home”.

But he agreed that Mr Sunak had simply deferred the cliff-edge. “The stamp duty holiday has once again shown the flaws in traditional working practices and flagged the need to future-proof the property market with a data-driven approach to drive transactions through to completion.”

“Given the technology at our fingertips, no homebuyer in 2021 should have to wait for weeks at the back of a queue for due diligence to be complete. Neither should any conveyancer have to apologise to their clients for delays caused by a system clearly past its sell-by date.”