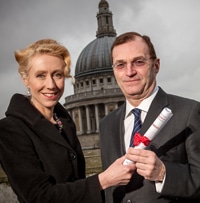 BT’s new legal arm will have more than 100 staff once it is at full strength, its head of legal practice has revealed.

Miles Jobling also expressed strong confidence that it would prove an attractive service to those seeking volume services.

As reported yesterday, BT Law has received its alternative business structure (ABS) licence so that it can offer clients an “end-to-end motor claims solution for businesses”.

BT Claims – which is being subsumed by BT Legal – already provided claims management services to corporate clients, but Mr Jopling said the ABS licence allowed him to wrap up litigation and make it a complete offering.

At the moment there are 15 people in BT Law but there is a “rolling programme of moving people across from BT plc to BT Law” – over the next year or two all 105 staff in the litigation and employment law team that he oversees will join the new business. “As we win bids, we will expand our resource as we need to,” he added.

The move shows how in-house teams can move from being a costs centre to a profit centre, Mr Jobling said. “It was formed in my area to drive the revenue we have been generating for BT for some time when we win cases.”

The solicitor said he had been eyeing up this opportunity ever since the Legal Services Bill was published in 2006 and had been “disappointed” that it had taken so long for ABSs to become a reality. Though the application process had taken a year, Mr Jobling said this was “nothing to do with the SRA being slow” and had actually helped the business.

BT Law has already flagged up expanding into public liability and employment law work, and Mr Jobling said the emphasis was on volume legal work, and possibly in time legal process work as well. He said he was “very confident” about the venture.

“Where this goes will depend on its success,” he said. “I do not underestimate how difficult it is to win and retain clients.” The BT brand helps “tremendously”, he added. There had been a discussion about branding, but the PLC had wanted the new venture to retain the BT name.