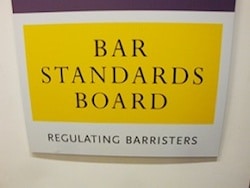 Two dual-qualified lawyers have been reprimanded by the Bar Standards Board (BSB) after receiving disciplinary sanctions for their work as solicitors.

Naveed Akbar was also fined £500, in part because he held a practising certificate from both the BSB and the Solicitors Regulation Authority (SRA) at the same time, which is not allowed.

He was the owner and co-director of Preston law firm Birleys with David Ahern. The pair admitted to the Solicitors Disciplinary Tribunal (SDT) multiple breaches of the accounts’ rules, including the failure to allocate almost £109,000 in withdrawals from client account.

They also admitted failing to participate in the management of the firm or discharge their duties as directors between October 2011 and April 2015.

They further admitted allowing the firm to become subject to the direction and control of “unadmitted persons”, including a struck-off solicitor. Mr Akbar was fined £15,000.

Mr Akbar initially qualified as a barrister and then took the Qualified Lawyers Transfer Test to become a solicitor.

He spent two years as an in-house paralegal and had no experience of private practice law firms. He had just a year of post-qualification experience at the time of becoming a director of Birleys, and 10 days later acquired the firm’s share capital from the previous owner.

The SDT heard that Mr Akbar then gave up his practice as a solicitor in order to take up a pupillage, while continuing to remain a director.

Mr Ahern resigned as a director in January 2015 and the SRA decided to intervene into the firm that April.

The SDT accepted that the extent of the obligations on him had not been made clear when he agreed to become a director and owner.

In an agreement with the BSB that meant he did not have to go to a tribunal, Mr Akbar – described as an unregistered (non-practising) barrister, having at the time of the tribunal been practising in family law – accepted that this conduct was “likely to diminish the public confidence in the legal profession and/or otherwise bring the legal profession into disrepute”

He also broke the rules by failing to report to the BSB that he was authorised to practise by another approved regulator, which meant that he practised as a barrister and obtained a practising certificate when he was not eligible to.

Babatunde Oladele Ojo, a non-practising barrister called in 2010, was similarly reprimanded and fined £500 after accepting in his agreement with the BSB that his actions were likely to diminish public confidence.

Last year, Mr Ojo entered a regulatory settlement agreement with the SRA under which he rebuked and fined £2,000 – the most the SRA can sanction a solicitor without a referral to a disciplinary tribunal – and agreed to pay £1,350 costs as well.

Mr Ojo was the sole director of Green Management Solutions Limited (GMSL), a business that has never been authorised or regulated by the SRA.

The agreement recorded that the purchaser’s solicitors asked Mr Ojo whether GMSL was regulated by the SRA and authorised to carry out conveyancing. Mr Ojo responded that GMSL was registered as providing legal services and gave its Companies House registration details. He confirmed his status as a solicitor authorised by the SRA.

The purchaser’s solicitors paid the completion monies into Mr Ojo’s personal bank account. The sale completed in October 2015 and Mr Ojo sent the money to the seller.

Mr Ojo admitted that by describing his own bank account as GSML’s client account and by providing information to the purchaser’s solicitors which could have misled them, he breached principles 2 and 6 of the SRA Principles – acting with integrity and behaving in a way that “maintains the trust the public places in you and in the provision of legal services”.

He also admitted to breaching of the SRA Accounts Rules.

In mitigation, Mr Ojo said he acted in good faith to assist a friend in a conveyancing transaction and pointed out that no loss was caused.