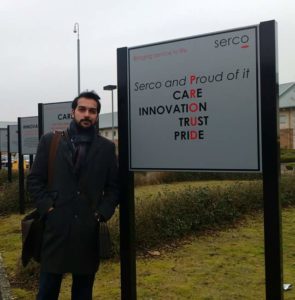 A Bar Standards Board-regulated (BSB) charity that provided pro bono legal representation in challenging the unlawful detention of migrants and asylum seekers has been wound up just 15 months after it was authorised, due mainly to problems with funding.

The Habeas Corpus Project (HCP), which was founded in July 2014 and authorised by the BSB in September 2015, ran free advice and litigation clinics, including one at the Yarl’s Wood Immigration Removal Centre.

It appears to be the first BSB entity to be dissolved.

The project, a registered charity and the brainchild of immigration barrister Ousman Noor, ran on grants and donations to survive, and completed a round of crowdfunding to stay solvent.

Mr Noor told Legal Futures that the project had closed its doors “at the start of this year due to lack of funding and exhaustion on my part”.

Its website, still operational this week, led with a statement: “The [HCP] has ceased to take cases as of 9 December 2016. We will be publishing our final report in February 2017.”

Mr Noor confirmed that the report “should be complete soon”.

The Companies House registry recorded the current status of the company behind HCP, Habeas Corpus Project Limited – incorporated in January 2015 – was “dissolved”.

The BSB register of entities stated that authorisation for the entity ran from 10 September 2015 to 9 December 2016. HCP was also authorised to conduct litigation.

Before it folded, the HCP had an eminent board of trustees, including its chair Bethan Rogers, a criminal barrister at Farringdon Chambers, DLA Piper partner Richard Bonner, and University of Westminster legal academic Dr Lea Sitkin.

A case ongoing when HCP folded was a Parliamentary Ombudsman investigation into the refusal by Yarl’s Wood to allow six volunteer solicitors entry to the centre to advise women detained there, in November 2015. HCP made a complaint to the Home Office with the help of its MP, Sir Keir Starmer, and received a partial apology.

The charity, “inspired by the principles of the Magna Carta and the rule of law in holding power to account”, gave legal advice, liaised with probation workers and immigration officers, lodged applications for judicial review, and ran training aimed at lawyers and non-lawyers on claims for unlawful detention.

In its first annual report 2014-15, published in January 2016, HCP said its primary goal was: “To provide legal representation to the most vulnerable with limited access to justice… [and represent] immigration detainees who cannot afford private legal representation and have been turned down by legal aid providers.”

In a statement in the annual report, Mr Noor said HCP had “assisted over 100 detained individuals and secured the release of 20”.