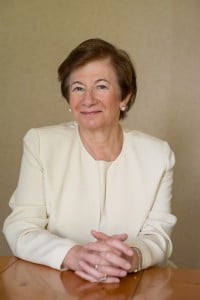 Deech: clear interest on the part of the Bar

The Bar Standards Board (BSB) has doubled its prediction of how many entities it expects to be overseeing by the end of 2015 after receiving Legal Services Board approval to regulate businesses.

It will start accepting applications from 5 January 2015, but can only start authorising entities from April, when temporary changes to the Civil Procedure Rules come into force that allow appeals against its decisions to be made to the High Court.

The BSB said that by regulating entities that focus on advocacy, litigation and specialist legal advice, it will “significantly help broaden the public’s choice as to how they access legal services”.

Barristers and other advocacy-focused lawyers will now be able to pool resources and share the risks of investing in their own business, without having to change regulators, it continued in a statement. There are a handful of barrister-focus alternative business structures currently licensed by the Solicitors Regulation Authority.

Initially the BSB expects to authorise mainly single-person entities – such as barristers wishing to incorporate their practice and form single person companies – and originally predicted [2] there would be 200 of them registering in the first year of the new regime.

But the level of interest shown in recent times means it has now doubled that to 400 in year one, while estimates for single-person entities for years two and three have increased from 300 and 400 respectively to 400 and 500.

Overall, the BSB expects to regulate between 900 and 1,400 single-person entities in the first three years of operation.

The BSB’s entity regulation policy statement emphasises that the first entities it is seeking to regulate are likely to undertake activities similar to those traditionally undertaken by the Bar, will not hold client money, and are of a simple structure – at this stage it will not be regulating multi-disciplinary practices.

But it commits to considering widening the scope of its regulation once it gains more experience and the market develops.

Strikingly, the Legal Services Board has backed a minimum level of indemnity insurance for BSB-regulated entities of £500,000 – the amount that last week it refused to allow the Solicitors Regulation Authority to adopt [3]. But it said that level is sufficient for individual barristers, who are likely to be the majority of the initial entities, and that the BSB has agreed to keep it under review.

BSB chair Baroness Deech said: “Our research shows there is clear interest on the part of the Bar in setting up or becoming part of an entity. As the regulator of barristers we are committed to helping the Bar develop new and innovative ways of providing legal services, because we believe this will benefit consumers and be in the public interest.”

The High Court will eventually be replaced as the venue for appeals by the general regulatory chamber of the First-tier Tribunal, but this requires a minor statutory change that can be made under section 69 of the Legal Services Act.