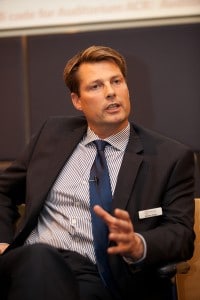 Brilliant Law – the alternative business structure start-up backed by gambling millionaire Bert Black – has adopted a new name and new strategy as it bids to become a top-30 commercial firm within the next five years.

As part of the reorganisation of what is now Genus Law, founding chief executive Matthew Briggs has left the business.

City lawyer-turned-banker Jag Mundi, Genus Law’s chairman, told Legal Futures that the firm’s experience to date had led to a shift in strategy so that it would no longer target private client work – it was handling a lot of claims, including PPI, he said – or volume commercial work through its templates store.

Instead it will focus on “growth corporates” and look to build relationships with them as they expand.

The core to Genus Law’s offering will be around transparency and certainty of pricing, and a different “mindset” where the priority was the client, rather than the partners’ drawings. Mr Mundi, who was a corporate lawyer at what was then Gouldens (now Jones Day), said the problem with partnerships is that they are “self-serving”. While “there are excellent lawyers out there in every firm, it’s hard to find organisations that engage [with clients] as a firm”. Instead partners take all the profit out and do not invest, he said.

Genus has “very supportive shareholders” who want to build a “significant business”, he said. They have a ‘buy and build’ strategy to scale up rapidly through acquisitions of teams and small firms, with a view to being a £100m business in the top 30 in five years. Genus currently has around 20 lawyers.

Mr Mundi acknowledged that this was an ambitious target, but said: “If you look at the people who are involved and what they’ve done in the past, they’re not interested in doing something else [ie, smaller].”

While the name Brilliant Law had provoked a reaction and served a purpose initially, the change of strategy meant that a new name was also appropriate, he added.

Mr Briggs told Legal Futures that he had taken the firm “to the point where the shareholders have got options”, and indicated that the approach of being a more “bespoke corporate” firm was not his preferred direction.

He added that he was also exploring different career opportunities, having already taken a non-executive directorship outside the law.

Mr Briggs said that though some saw the name Brilliant Law as “brash and arrogant”, it actually referred to the “brilliant idea” of having a law firm owned by business people, rather than its own brilliance.

Mr Mundi praised the work of Mr Briggs in establishing and growing Brilliant Law, adding that he had nothing bad to say about what had been achieved to date.