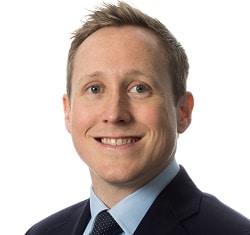 Kirby: national plan is not essential

The first private equity fund to invest in a high street law firm that has now put money into a ‘dispersed’ law firm has said it is “business as usual” despite Brexit and it would welcome further approaches from solicitors.

Ben Kirby, an investor at BGF who joined the board of Setfords as part of the deal, told Legal Futures that he was “always keen” to meet law firms looking for investment – as long as their annual revenue was over £5m.

“We’re happy to meet management teams looking for this type of funding,” Mr Kirby said. “There may be an existing growth story we can accelerate or an opportunity for us to help a firm achieve growth.”

Mr Kirby, who trained as an accountant, said he had spoken to a number of law firms before the deal with Setfords, some of which were too small to be suitable.

He said BGF did not require law firms to have national brands, like Setfords or MW, and they could operate on a regional basis. “National ambition is good, but a national plan is not essential.”

Mr Kirby said BGF initially invested between £2 and £10m in a company in return for a minority stake no greater than 40%, the ability to sit on the board as a director and invite a non-executive chairman or director to join them.

He said BGF was interested in how law firms could use technology to achieve growth, for example how Setfords used its case management system to run a paperless office with a large number of lawyer contractors across the country working at home.

“Technology can be vital to a business and its ability to scale up, as well as encouraging more effective working.”

Mr Kirby said Brexit had not changed the appetite of BGF to invest in SMEs, including law firms.

“The week after the referendum was our busiest of the year. We wanted to send a very strong signal that we would continue investing. If we stopped, and other people stopped, there would have been a slowdown.

“The companies we talk to are keen to grow and build a national brand. Brexit hasn’t changed that. It’s business as usual. Legal services is a large market, giving us the ability to have a number of investments which all do well.”

Mr Kirby added that BGF did not look for investments on a sector-wide basis, but instead responded to opportunities as they presented themselves. In the case of Setfords, he said managing director David Rogers was a personal contact.

“We’re looking for good management teams and strategies whatever the sector. If you’re doing something interesting and have a good business model, then we’ll take a view.”

BGF said it was on course to invest more than £370m in SMEs this year, compared to £250m last year, and was the top institutional investor in the market by number of deals in the three months following Brexit.