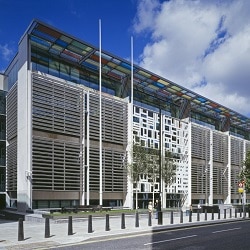 Home Office: Thethi also claimed to be a government official

A woman who falsely claimed to be a qualified immigration lawyer, and did not deliver on what clients paid her £68,000 for, has been jailed for five years.

Harvinder Kaur Thethi, 46, of Solihull, was found guilty of six counts of fraud by false representation.

The offences took place between June 2013 and September 2014 in Hounslow, West London.

Thethi falsely claimed to be a barrister, solicitor and a Home Office official with the ability to progress immigration applications.

She obtained £68,000 from vulnerable people in payment for immigration-related services which were promised but not delivered. She ingratiated herself to the victims and was treated as a daughter or sister, Southwark Crown Court heard.

The prosecution was the result of an investigation led by the Office of the Immigration Services Commissioner in partnership with Immigration Enforcement and the Metropolitan Police.

His Honour Judge Loraine-Smith sentenced Thethi to five years imprisonment on each count to run concurrently.

The judge said: “You decided to embark on a fantasy life, when you claimed to be a successful lawyer earning a large income. You were nothing of the sort.

“The large amounts of money you obtained came entirely from money you had stolen from people you had befriended and cheated. People whose immigration status is precarious are very, very vulnerable. It is not surprising that if they found somebody they thought was a family friend, they could be convinced to part with large sums of money they could ill afford.

“You preyed on their vulnerability again and again… the investigation was thorough, fair, and – it is clear from the Victim Personal Statements – kind. I commend both officers in this case.”

“The OISC is here to ensure that people seeking immigration advice are treated fairly by qualified people they can trust. Ms Thethi was operating outside of the law, preying upon vulnerable victims without regard for their protection or the consequences of her criminal behaviour.

“I am delighted with the outcome of this case, and I hope it sends a clear deterrent message to anyone considering acting similarly.”