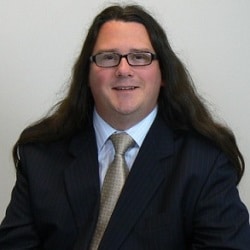 Alan Blacker, also known as Lord Harley and one of the most talked-about solicitors of recent years, has today received a suspended prison sentence for benefit fraud.

Mr Blacker, 47, said he could not walk without help, but was spotted driving a miniature train.

He gained a measure of notoriety for using the title ‘Lord Harley’ and claiming a huge number of honours and achievements on his LinkedIn profile.

However, in August 2016, he was struck off by the Solicitors Disciplinary Tribunal, in part because he published “inaccurate and misleading” academic qualifications, appointments, accreditations and titles.

A judge in Manchester Crown Court sentenced Mr Blacker to nine months in prison, suspended for a year, after he was found to have dishonestly claimed Disability Living Allowance for five years, stealing £23,127 from the taxpayer.

In his application forms for the benefit, he claimed he was unable to walk without physical support from another person; required personal care from another person at all times during the day and night; could only be left safely for 15 minutes at a time but generally not at all; and could not manage steps or stairs. 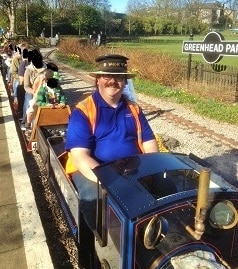 Alan Blacker on a miniature railway

However, video footage and surveillance material gathered by Department for Work and Pensions investigators showed him: driving miniature locomotives and getting on and off them with apparent ease; taking part in first aid courses which required bending, kneeling, lifting and standing for significant periods; and taking part in training sessions and parades with the Sea Cadets.

Further, he was seen representing a defendant at Cardiff Crown Court in a serious matter and navigating the court building – and conducting a site visit to a stretch of dual carriageway – with ease. This included going up and down a significant number of steps at a brisk pace with no difficulty at all.

He was found guilty last month of making a false representation to obtain a benefit.

The jury failed to reached a verdict on a further count of dishonestly failing to notify a change in circumstances.

Rob Girvan, of the Crown Prosecution Service’s Mersey Cheshire Fraud Unit, said: “At one point during this investigation, Alan Blacker was working as an advocate in Cardiff Crown Court, moving around the building with ease and climbing stairs, while claiming benefits aimed at people who are ‘virtually unable to walk’. 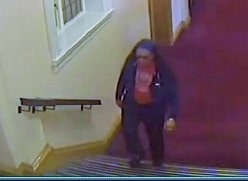 “He had several hobbies and interests, most of them requiring a degree of mobility which he said he didn’t have.

“The Crown Prosecution Service built a strong case against Alan Blacker and the jury agreed with us that he made deliberate, dishonest representations about his capabilities.”

Last year, the Solicitors Regulation Authority made Mr Blacker bankrupt over unpaid costs from its investigation.