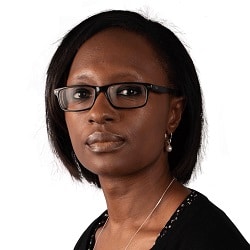 Odimba-Chapman: I couldn’t see how I could acquire gravitas

Leading black women lawyers have spoken about the challenges of succeeding in City law firms, including the problem of acquiring ‘gravitas’, and the fear of being seen as an ‘angry Black woman’.

At the Law Society’s Fiona Woolf Lecture 2020, held virtually, several high-powered Black women lawyers described the amount of energy they had spent when younger considering the likely impact of their responses in order to avoid label of being unnecessarily aggressive.

The lecture focused on ‘intersectionality’ – the meeting of discrimination based on gender and race – and the question of why there were so few Black women lawyers in senior leadership roles in the profession and what could be done to change it.

Law Society figures showed that while women made up half of all practising solicitors, fewer than 28% of partners in private practice were women. Black lawyers formed 3% of the profession, yet those of African/African Caribbean origin comprised less than 1% of partners.

In fact, the Times reported that just five of the 756 UK partners at the five magic circle firms were Black.

Kellie Scott, former associate general counsel at bank JP Morgan, recounted how it was assumed she was at client meetings to help with refreshments, and had even been instructed by someone how they took their coffee.

She said: “There’s nothing wrong with being a tea lady, but it was assumed based on the colour of my skin that it was the only reason I could possibly be in a meeting room. Those assumptions are still a reality for most of us.”

Chinwe Odimba-Chapman, an employment partner at Clifford Chance, said that when she was a junior lawyer she was told that she needed to develop ‘gravitas’ to be a partner at the firm.

“I couldn’t see how I could acquire gravitas and people said to me ‘you get it when you look older [such as having grey hair]’.

“But frankly… it wasn’t happening to me… [so I had to] change the perception of myself as a Black woman to someone who is not just viewed as junior but viewed as someone who has gravitas.

“I knew I was a good technical lawyer, communicator, facilitator… [but I was forced to examine] what I brought the table.”

Ms Scott added that she also had to challenge “the ‘angry Black woman’ stereotype and comments made about you being a bit aggressive or excited, when all you’ve done is voice an opinion that is different than a colleague’s – typically a White colleague”.

She went on: “It’s not even a matter of you raising your voice [or] gesticulating wildly, it’s really enough that you had the audacity to question a White person’s view.

“I think these are the perceptions that Black women face on a regular basis and I think we’ve learned to brush it aside and move on.”

She concluded that, with hindsight, adjusting her behaviour accordingly had done her no favours. She advised Black women solicitors to “stand up, question the power structures, speak out and don’t modify your behaviour just to make someone else comfortable”.

Dual-qualified solicitor and New York attorney Dr Shola Mos-Shogbamimu said the “standard of professionalism”, was “being determined by whiteness”, as was “what you look like [and] sound like”.

She added: “Your authenticity is part of your asset and we don’t all have to be loud… We all have different personalities and that should be embraced; it’s part of the diversity.”

Sharon Blackman, managing director and general counsel of global investment bank Citi, a barrister and New York attorney, complained it was assumed she had wanted to go into crime or family law when actually her interests were in Chancery or tax.

The assumptions had been “a red rag to a bull” at the time.

She related that she had been enraged by a more junior colleague who commented that “the slave trade was quite a positive thing for you” because it had brought her family to the UK.

Her first thought was how she would be perceived if she said what she was thinking, which was “how dare you?” And “why would you even say that?”

At the time, she said, she did not “feel equipped to have that conversation” even with a junior colleague.

The lecture was preceded by remarks by Stephanie Boyce, the Law Society vice-president, who is Black and will next year become the first ethnic minority president in the organisation’s 200-year history.