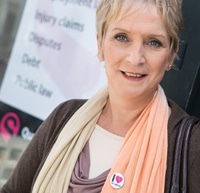 A happy QS customer after making her will

Forget the John Lewis Christmas advert – lawyers have stepped up efforts to target the over-50s and the victims of medical accidents in the latest high-profile marketing pushes by QualitySolicitors and First4Lawyers respectively.

The moves come as the LawStore – the high street brand of MTA Solicitors – has launched a social networking site aimed at getting people to share and resolve legal issues.

QS’s campaign aims to encourage the over-50s to make wills, having commissioned research that showed only 30% of that part of the population has one – and of those that do, nearly half had never reviewed it.

Using the title ‘50 Shades of Grey’, the campaign emphasises the uncertainty left for families and friends when a loved one dies intestate.

QS chief executive Eddie Ross said: “Our campaign takes the insight from our consumer research to target those most likely to be spurred into action. The over 50s are often willing to talk about what happens when they’ve gone, but almost three quarters of them admit to not having a valid will.”

Meanwhile, marketing collective First4Lawyers has launched its first dedicated clinical negligence campaign on TV and online, which it said was in response to a doubling of claims enquiries received over the last 12 months and increased demands from solicitors looking to join its medical negligence panel.

The £1.5m campaign will appear across 150 digital and terrestrial TV channels each month and is expected to be seen 170m times by the end of 2015. Former British tennis player, turned TV presenter, Andrew Castle provides the voiceover, as he has done for First4Lawyers adverts since 2011.

The advert shows a family facing the consequences of medical negligence and a “mother’s journey from hospital bed to recovery”.

First4Lawyers’ business development head Chris Rodgers said: “With a 10% market share in the medical negligence market, First4Lawyers is already one of the largest providers of highly vetted medical negligence claims and intends to double the number of claims it sends to its panel of solicitors over the next six months.” It also expects to grow the panel.

At the same time fellow marketing collective National Accident Helpline has ceased all e-mail marketing [2] to prospective customers and called on the wider claims industry to behave more responsibly with regard to opt-ins. It forms part of the company’s Stop Nuisance Calls campaign, which is also targeting cold calling.

Meanwhile, LawStore Social [3], which launched in October and already has around 100 members, encourages people to post their legal experiences and issues with the aim of helping to find the best resolution to their problem. Members can also share news, provide information and professional updates as well as engage in debate. LawStore monitors the site and posts useful help and advice where relevant.

David Green, managing partner of MTA Solicitors said: “This is definitely one of our most exciting brand development launches to date as there is so much scope to build on the site’s functionality.

“We have launched the site as it gives us live insight into what the key legal issues are that are affecting people and what their experiences are in resolving them. This then gives us invaluable business development information, as to how to improve our services and client care. We can also give advice to help members via the site.”