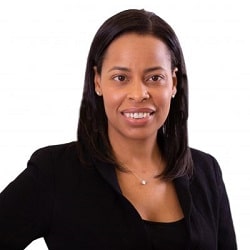 Newton: Wear your hair however you feel comfortable

Young barristers from ethnic minorities should not be afraid to be who they are – including maintaining their hair in its natural look – as they look to progress, pioneering QCs have advised.

The six Black women barristers who became QCs this year – an unprecedented number – also urged them to build career-long relationships with solicitors and take control of their practices.

In a webinar held by the Black Barristers’ Network, the six shared the experiences and challenges they had faced.

They were: Krista Lee, a construction law specialist at Keating Chambers; Barbara Mills, a family lawyer at 4PB; Melanie Simpson, a criminal defence barrister at 25 Bedford Row; Katharine Newton, an employment specialist at Old Square Chambers; her chambers colleague, Ijeoma Omambala, an employment, public procurement and health care law specialist; and Allison Munroe, who has a mixed practice at Garden Court Chambers and whose prominent work has included both the Hillsborough inquest and Grenfell Tower inquiry.

On working in a predominantly white profession, Ms Newton said she had been struck by how many junior Black barristers and students had contacted her to ask if it was okay to attend pupillage interviews with their natural hair.

She said: “We need to stop and think how ridiculous and awful it is that we should have to think about whether something that grows naturally out of their head should be changed…

“Somehow in this narrative they have been made to feel that natural hair is in [some] way not professional.”

She said she always advised they should wear their hair “however it makes you feel comfortable”, and ask themselves “why would you want to be a member of that chambers when you have to change your head to get in? What sort of career is that going to be for you?”

Ms Munro agreed it was vital that young people of colour should not “deny who you are [because] ultimately it’s going to eat away at you; It is not good for your health or your soul”.

However, she acknowledged that to some extent, as someone from a working-class background, she had had to modify her behaviour in order to be taken seriously in court.

“If I was going to be my true self in court and with clients… I’d probably be speaking with a much stronger Cockney accent… peppered with West Indian idioms.”

She added: “But modification doesn’t mean you completely subsume and erase your identity.

“If you, as a young student coming into the Bar, feel you are compromising your identity and toning down your blackness, then there is something wrong about the environment you’re working in, not you. That’s what you’ve got to remember.”

Ms Mills said that when she was appointed a recorder, one of her colleagues had said with a straight face: “Your appointment must be really good for their stats.” When she asked why, he explained: “Well, you tick both boxes, black [and] woman”.

She remembered that, at two or three years’ call, she had been confused with a court usher. Her brother had commented that she needed to “up your swagger and make sure that next time you enter the court, nobody thinks you’re anything but the barrister”.

Ms Omambala said she had also been confused with clients or court staff, to which she had responded with “as much graciousness as I could muster”.

But she suggested that the ignorance that had led to confusing her role in the first place meant that any embarrassment should be felt by the perpetrator, not the barrister.

Ms Simpson advised that young barristers should build networks with young solicitors, who would help them achieve an independent workstream and so give them independence and control over their practices. “Nurture those relationships… As you progress in your career, they will also progress; the work they will send you will be high-level work.”

She observed that as a criminal barrister she had had to struggle against being pigeonholed defending cases involving sex, like rape, whereas overwhelmingly it was male barristers who tended to be appointed to those cases involving firearms and drugs.

Ms Newton recommended that young barristers facing unequal treatment when compared to their colleagues should in the first instance contact the equality and diversity hotline operated by the Bar Council.

She advised that Black women barristers had to ensure the client care was excellent; they should also join specialist Bar associations and become prominent in their chosen fields.

They should not be afraid to knock on doors, literally as well as metaphorically. She recounted how she had become involved in one of the most interesting cases in her career – involving the gig economy and workers’ rights – by knocking on the door of a QC in her chambers and expressing an interest in becoming his junior.

Asked to give her top tip, Ms Mills suggested young Black barristers should seek her help and that of the other panellists. “We are only an email away… You are not alone. Reach out and ask [for help].”