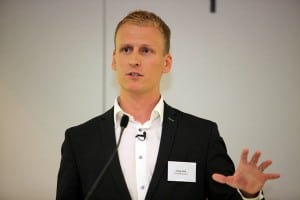 Some of the country’s biggest legal brands are going head to head on our screens this month after Irwin Mitchell launched its first-ever television advertising campaign, Russell Jones & Walker (RJW) unveiled a new approach to promoting its Claims Direct brand and QualitySolicitors (QS) started its second round of adverts.

The campaigns indicate that the battle for the consumer legal market is hotting up: both Irwin Mitchell and RJW are alternative business structures, while QS has private equity funding.

Irwin Mitchell’s advert is for its personal injury (PI) practice, but rather than focusing on compensation it tells the story of how an injury can affect the victim’s family and the role of rehabilitation.

Stuart Henderson, managing partner of the personal injury practice, told Legal Futures that the move into television advertising – from which Irwin Mitchell has stood back up until now – aimed to help realise the firm’s stated goal of becoming the legal brand of choice for consumers.

The test campaign – which is starting on satellite before moving onto terrestrial channels later in the year, supported by other forms of marketing, including promoted tweets on Twitter – marks a shift away from traditional PI advertising that focuses on how much compensation people can recover.

“The style of a lot of adverts has started to give PI lawyers and services a bit of a bad name,” Mr Henderson said. “We wanted to present a different image of PI lawyers and convey what’s most important to clients.”

If the PI campaign proves successful, the firm will extend it to other areas of personal legal services, he said.

The new Claims Direct campaign – the first since RJW was acquired by Australian firm Slater & Gordon – also marks a change in style as it looks to tell the story of a typical claim in a humorous fashion. The adverts are typically on satellite channels during the daytime and early evening.

RJW’s marketing director, Andy Hoe, said the aim is to “broaden the appeal” of the Claims Direct brand. “The key element of the campaign is to get across that it’s about more than just the money.” He welcomed the fact that Irwin Mitchell is taking a similar tack, saying it is a better way for the profession to portray its work.

QS ran 8,000 adverts in May, and the autumn campaign uses the same ‘For whatever life brings’ advert, but unlike last time – when QS’s identity was only revealed at the end – a voiceover has been added.

Chief executive Craig Holt told Legal Futures that “unlike PI adverts, which are almost always daytime TV, ours remains a prime time, terrestrial focused advert” – it will feature during Downton Abbey and The X-Factor this weekend.

“We always planned the addition of the voiceover for this next phase to further increase brand recall and start to convey some tangible QS service offerings, such as Saturday opening.”

He said the campaign, which will be similar in reach and frequency to the last one, will be supported by over 1,000 billboards and poster sites as well as full-page national press adverts, “making it, once again, the largest seen in the profession”. It will run through until the end of November.

As revealed by Legal Futures last month, the outdoor campaign will be openly ‘anti-supermarket law’. Mr Holt said a new set of TV adverts are now being prepared for next spring.