Barristers urged to be “active bystanders” in fight against harassment 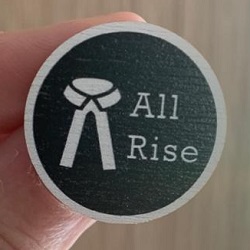 All Rise: Pin is a symbol of allyship

A project encouraging barristers to be ‘active bystanders’ – speaking out and standing against abusive, bullying and belittling behaviour – has been launched under the name ‘All Rise’.

The four barristers behind it have designed and produced a pin badge that barristers can wear as a symbol of allyship and a sign to others that the wearer will use whatever power they have in a given situation to stand against unacceptable behaviour and act in support of those in need.

The founders are Bo Kay Fung, a legal adviser at the Financial Conduct Authority, Chris Gutteridge of Exchange Chambers, Lydia Pemberton of 3 Paper Buildings and Morayo Fagborun Bennett at Hardwicke.

They met on the Bar Council’s inaugural leadership programme, a project aimed at changing the culture of the Bar though facilitating a network of new leaders.

The idea came from their discussion of a Legal Futures story in February about a disciplinary tribunal case involving a male barrister sexually touching a female barrister more junior to him.

Mr Gutteridge told Legal Futures that “the big triggering thing for me was that, in room full of barristers, a junior barrister cannot say ‘Stop’”.

He added: “This is, in a word, appalling. It casts a shadow over the whole profession.”

All Rise aims initially to raise £5,000 to produce 4,000 pins so they can have 25% of barristers wear one. The quartet learnt on the Bar Council course that culture change generally requires “a committed” 25% uptake, Mr Gutteridge said, although “it would be nice to get the whole of the Bar involved”.

As of yesterday, the group has secured pledges and contributions of about £2,250.

As well as deterring potential abusers if they are “surrounded by people who visually say they will not stand by”, he said, the initiative would “hopefully educate barristers to be active bystanders and use power they’ve got to stand up to abusive, harassing behaviour”.

Having that support could also help the problem of under-reporting by victims that has dogged efforts to crack down on bad behaviour.

Mr Gutteridge said the group was keen to improve awareness in particular of “belittling behaviour” or microaggressions – “small comments that can cut deep and have big personal and professional implications” but may pass unnoticed by others.

He reported strong support for the project, including from the Bar Council, and said chambers, circuits and inns of court have been in contact to see how they could help.

The barrister said they appreciated this was “a small first step on the long road to tackling a very big problem. But if you don’t take small steps, you never get started. I do think it can make a real difference.”

Individual barristers can buy a pin for £5. Chambers and other organisations can sponsor All Rise for a minimum of £100.

The pin badges are wooden and environmentally friendly, and come on a recycled cardboard backer that can be re-used as a bookmark.