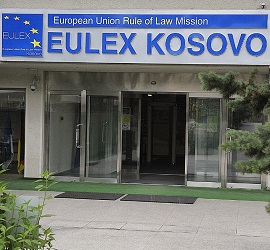 A barrister who raised concerns of serious corruption while working for the Foreign, Commonwealth and Development Office (FCDO) in Kosovo has settled her employment dispute for £423,000 following her dismissal in late 2014.

The settlement – reached shortly before an 11-day employment tribunal hearing – was made with no admission of liability by the FCDO.

Maria Bamieh had argued that the FCDO, as her employer, completely failed to provide any support for her from the point at which she became vulnerable as a whistleblower in Kosovo while working for the EU’s rule of law mission, called EULEX, leading to the termination of employment.

A former senior Crown prosecutor, she had been working in Kosovo for the FCDO since 2008, latterly as an international prosecutor for EULEX, leading its work on financial crime.

In mid-2012, she raised concerns about serious judicial corruption with both EULEX and the FCDO.

Ms Bamieh claimed that, soon after, she was subjected to inappropriate and oppressive bullying and management within EULEX, facing disciplinary proceedings for what she considered minor infractions. One, on facilitating work experience opportunities, was dropped but she received a warning for the other, concerning car parking violations.

She said the FCDO did nothing to support her and instead enforced the warning.

The FCDO reduced its number of prosecutors in EULEX in 2014, using a scoring exercise overseen by EULEX; Ms Bamieh was marked 22 out of 25 candidates and so was removed by the FCDO.

According to her solicitors, Leigh Day: “Maria reported her concerns about the fairness of the selection exercise to the FCDO, who in turn chose instead to issue notices of withdrawal to the entire FCDO contingent of prosecutors so that each, including Maria, would need to be reselected to remain in EULEX.

“In the subsequent reselection exercise, however, Maria’s interview was overseen by a panel of external EU interviewers who were closely connected through national and professional affiliation to those about whom the corruption complaints had been made in 2012 .

“Maria believed that the questions fielded in her reselection interview were hostile and omitted any possibility of assessing her suitability based on her very extensive criminal law prosecutorial experience in Kosovo.”

Shortly before her role was terminated in late 2014, she was suspended after being accused of telling the Kosovan media about the corruption concerns she has raised.

Ms Bamieh denied being the source but, later that month, decided to speak to the media to raise her concerns “as she believed they were not being taken seriously by EULEX or the FCDO”, Leigh Day said.

Her allegations – either about the supposed corruption or how she was treated – have not been upheld by internal or external investigations.

Her employment tribunal claim began in 2015 against EULEX and various people working there, along with the FCDO. It included unfair dismissal and detrimental treatment on the grounds of having made protected disclosures.

Through various hearings the respondents were whittled down to just the FCDO and Leigh Day began acting in August 2021.

Ms Bamieh said: “I believe that I should have been commended and supported by the FCDO for raising my concerns about possible corruption within EULEX and the treatment I suffered afterwards, but instead I felt abandoned by them.

“Without the bravery of whistleblowers, or a supportive culture to empower them, wrongdoing can go unchecked and hide in the shadows. I am pleased that after years of dispute I was able to bring a legal case against the FCDO, as my employer, and that the case has finally settled.”

Leigh Day partner Mike Cain said: “The protection of whistleblowers is crucial for a fair and functioning democratic society.”

An FCDO spokesman said: “We have agreed to settle this long-running case without any admission of liability and continue to strongly refute these allegations.”

The settlement is said to include a large tax liability which was paid directly to HMRC.