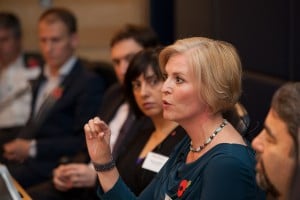 The problems with the Co-operative Bank will not have an impact on the growth of Co-operative Legal Services, its director of policy said yesterday.

The assertion came as the Solicitors Regulation Authority (SRA) published guidance highlighting the risks of ‘group contagion’ in the legal market.

Speaking at yesterday’s Legal Futures conference in London, Christina Blacklaws acknowledged that it is “a challenging time for the Co-operative Group”, but said she was confident that it would not damage either the legal services arm or the wider group.

“This is a brand that’s been in the public psyche as a trusted brand for 165 years. I don’t think that trust will be eroded or in any great way impacted negatively because of the recent problems with the bank,” she said.

Ms Blacklaws emphasised the group’s commitment to the legal services market and said that “from next year legal services are going to take an even greater place in the shop window of the Co-operative Group”.

The SRA publication – Catching a chill: law firms and the risk of group contagion – defined the issue as “the risk that liabilities, losses or events affecting one part of a group, then affect a regulated legal firm within that group, which impacts on the regulatory objectives. The impact on the legal firm may range from reputational damage to financial failure”.

The SRA broke the risk down into two main categories: direct contagion, involving a financial shock to one firm in the group spreading through the rest of the structure through direct financial links; and indirect contagion, involving outsiders reacting to an event at one firm in the group, with impacts on the rest of the structure.

The most common manifestation of the latter, the SRA said, is reputational harm, which it said is “hard to control without giving up the benefits of a single brand”.

It continued: “Although it is slower to make a financial impact, indirect contagion also carries the threat of harm to reputation and public image. Given the value of the brand to most commercial firms’ operations, this is a significant impact. After a severe scandal in part of a group, addressing the contagion can require drastic remedies.”

As an example outside the law, the SRA pointed to the impact of the phone hacking scandal at the News of the World on the News International group.

The regulator said the best approach to controlling the risk of direct contagion was through the use of firewalls. “Strict adoption of these controls may hinder the efficiency of the group by preventing unified operations. The balance between controls and efficiency is a question that firms must decide for themselves in line with their risk tolerances.

Ways to control indirect contagion included reputational risk management, “prompt and effective remedial action after a scandal to control wider damage” and the use of a holding company without a single brand.

The guidance concluded: “There are many benefits of group structures, both to businesses themselves and to their clients. These benefits may take the form of economies of scale, a strong and trusted brand or the potential for cross-selling to better meet the needs of a client.

“We do not wish to discourage group structures or limit the benefits they may lead to. The aim of this paper is to highlight the risk of group contagion and the need for good controls to be put in place.”