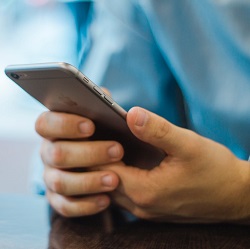 Mobile: Hundreds of calls with client in prison

A law firm consultant jailed for communicating with a prisoner on mobile phones that were smuggled into prison has been banned from working in the profession.

Dene McClean, 37, communicated with prisoner Jonathan Gomez on seven illegal mobile phones on at least 544 instances while he was on remand awaiting trial for firearms offences at HMP Wormwood Scrubs.

Some of the calls and messages took place over three days while Gomez was a sworn witness in his own trial at Harrow Crown Court in June 2017, even though he was explicitly warned by the judge that he was not allowed to communicate with his legal advisers during this time.

In all, there were more than 16 hours of communication and dozens of messages between the pair over a 12-month period. McClean was part of his defence team at the time.

In a WhatsApp message sent to Gomez’s girlfriend, McClean wrote: “Tell him to call me from prison phone, not the mobile tomorrow afternoon.”

McClean was a police station representative and consultant at London law firm CarsonKaye at the time of the misconduct and Sperrin Law when he was convicted, was sentenced to 42 weeks in custody.

The offences were discovered when a mobile phone belonging to Gomez’s girlfriend was examined in connection to her boyfriend’s offending. This took place as part of a review by prosecutors into Gomez’s case following the collapse of this first trial.

The Solicitors Regulation Authority has made McClean subject to an order under section 43 of the Solicitors Act 1974, meaning no law firm can employ him without the regulator’s consent.

After McClean’s arrest, Gomez was convicted of conspiracy to possess a firearm with intent to endanger life following a retrial and sentenced to 12 years imprisonment.

He later went on to plead guilty to offences relating to communicating with McClean and the court added nine months to his sentence.

Crown prosecutor Robert Hutchinson said at the time: “Dene McClean demonstrated a flagrant disregard for the integrity of the criminal justice system by repeatedly and deliberately flaunting the ban on communicating with prisoners on illegal mobile phones.

“McClean’s actions were criminal. As somebody working within the legal profession, he should have known better.”