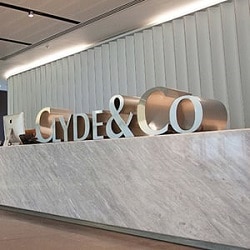 A management accountant jailed for stealing £400,000 from leading City law firm Clyde & Co over six years has now been banned from working in the legal profession.

The Solicitors Disciplinary Tribunal (SRA) made a section 43 order against Victoria Lucy Brown, which means she cannot work for a law firm without permission from the Solicitors Regulation Authority. She is currently in prison.

In October 2019 at Guildford Crown Court, she pleaded guilty to, and was convicted of, one count of fraud by false representation and was sentenced to three years and six months’ imprisonment.

She worked for Clyde & Co, through its service company, from August 2008 until September 2017, when she resigned. Initially a legal cashier, from November 2010 she was an assistant management accountant.

In that role, she was responsible for arranging UK payments for Clyde’s overseas operations, was part of the payment releasing team within the payable department, and had authority to create and release payments requested by various departments.

The firm was first alerted to problems in April 2018 as a result of irregularities with certain payments Ms Brown had made.

This led to a forensic investigation conducted by accountants BDO that identified 134 suspect payments totalling just under £400,000 from the firm’s office account between 2011 and September 2017; BDO said there could have been more before then.

She disguised them as payments to suppliers and employees in two ways: editing and resending legitimate emails to use as supporting documents to authorise fraudulent payments to herself; and authorising a bank transfer for a transaction which had already been paid in cash.

Passing sentence, His Honour Judge Fraser said it was a ‘category A’ offence, “because not only of the abuse of your position of trust, but there was some sophistication in the way you went about this to hide what you were doing and, indeed, I can’t ignore the fact you carried it on for over six years”.

The starting point was six years’ imprisonment, reduced by a third for pleading guilty and then by a further six months to reflect Ms Brown’s personal mitigation, “which is your good character and obviously the remorse, which I do accept is genuine in your case”.

Ms Brown is currently facing proceedings brought by the Crown Prosecution Service for a confiscation order under the Proceeds of Crime Act, while Clyde & Co obtained judgment against her in civil proceedings in April 2019.

As a result, there is a freezing order in place across all of her assets and she told the tribunal that, by the end of these actions, she would likely be made bankrupt or forced to file for bankruptcy.

Ms Brown did not object to the order being made, saying she did not intend to work in the law again.

The SDT said it was “entirely right and proper that the public be protected and this was achieved by the imposition of the section 43 order”.

Ms Brown had pleaded with the tribunal not to fine her too, given her financial situation, and it agreed not to.

It said: “Given that [she] had served a significant period of time in custody as part of her sentence, the tribunal did not consider that it was proportionate to impose a fine in circumstances where there had been no detriment to the clients of the firm (clients’ money had not been taken) and the reputation of the profession was protected by the imposition of the section 43 order.”

A Clyde & Co spokesman said: “We are aware of the SDT judgment relating to a former employee of the firm who has been convicted of theft.

“This follows a complaint we made to the police in 2018 following an internal investigation where we identified an historical case of fraud against the firm, which led to Ms Brown being convicted in Guildford Crown Court and serving a custodial sentence.

“It was an internal issue and no client funds were affected. Following this incident, we have reviewed our internal processes and we are confident that we have the right measures in place.”