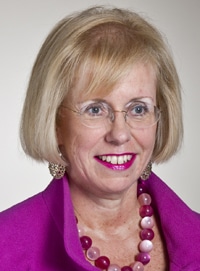 Mahy: something that somebody should have thought of before

Using ex-City lawyer parents looking to return to practice is a way for in-house lawyers and law firms to onshore services that many people are saying should be offshored, a former FTSE 100 general counsel said this week.

Helen Mahy is to chair Obelisk, the innovative legal outsourcing business that uses former City solicitors, mainly women returning to work after having children, to provide temporary support to law firms and in-house teams when they need help dealing with work overflow at junior/legal support level.

Ms Mahy, an employed barrister who is currently group company secretary of National Grid plc and was its company secretary and general counsel from 2003 until last month, takes up the appointment from 1 February 2013.

Ms Mahy is executive sponsor of inclusion and diversity at National Grid. Speaking to Legal Futures she said she was “singing from the same hymn sheet” as Obelisk regarding its philosophy of assisting women to re-enter the workplace.

Obelisk, founded in 2010 and which announced ambitious expansion plans in March, now has more than 100 ex-City lawyers with more than five years’ PQE on its books.

She described the Obelisk model as “onshoring services that in fact a lot of people are saying should be offshored… actually they’re using a resource that is here in the UK that isn’t being used… It seems to be something that somebody should have thought of before.

“We’ve got these women… who essentially have decided to give up their legal careers for family reasons and find it very hard to get back into the traditional law firm structure. [They] are a huge untapped pool of talent which Obelisk is getting back into work and working around their own needs and requirements. It seems to be the ultimate in flexible working – which I’m passionate about.”

Obelisk chief executive Dana Denis-Smith, who previously practised at Linklaters, said: “Helen brings us the experience of a stellar legal career as well as a shared passion for the role that diversity can play in the growth of any business.”

Ms Mahy said Obelisk’s approach was “equally fit” for both general counsel and law firm clients, in particular as a “cost-effective and good way of outsourcing” high-volume work. Flexible working was compatible with all but the most senior level roles in-house or in a law firm, she argued.

The model worked even with major project work such as a rights issues or mergers and acquisitions, she continued: “A lot of it can be done from home now… so I think it’s actually a very good resource for big transactions. It’s not designed to cover everything but for specific areas where you need… good-quality but relatively routine legal advice I think it’s absolutely made for that. It can be of great assistance to law firms and in-house teams to give them a back-up resource at a reasonable price.”

Ms Mahy is a non-executive director of Stagecoach Group plc, where she chairs the health, safety and environment committee, and an advisory board member of the diversity campaign Opportunity Now. She is also an associate of the Chartered Insurance Institute, an accredited performance coach, and a published children’s author.