Back to the future for QualitySolicitors as Metamorph buys network 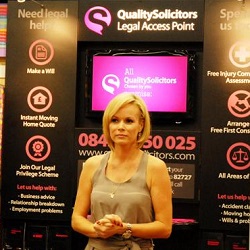 QualitySolicitors is set for rejuvenation as a national network of law firms after being acquired by consolidator Metamorph Group.

The brand once famous for putting legal advice points inside branches of WH Smith and being promoted by Amanda Holden, has dwindled to 35 member firms in recent times, but Metamorph intends to get that back to 100 in the next two to three years.

At its height it had around 150 firms and in the early days had ambitions for 1,000.

The network, which launched in 2009, was previously owned by private equity firm Palamon and was part of its property and conveyancing group Simplify.

It has been providing mainly lead generation and marketing services to member firms and in its last filed accounts, to 31 March 2020, recorded a turnover of £829,000.

Metamorph owns 11 law firms under multiple local and national brands, with centralised back-office operations key to the model. Its turnover is currently around £40m.

Tony Stockdale, Metamorph’s executive chairman, said the aim was to broaden the range of services available to QS members significantly – not dissimilar to the original vision for QS – but stressed Metamorph was not looking to buy them.

“We believe we’ll be able to build a strong relationship with the members of QS, increase the membership over the next two to three years back to 100, and provide each of them with the opportunity to increase their profits.”

The geographical spread of the QS network did not overlap with the locations of Metamorph-owned firms and Mr Stockdale said its existing brands would likely join QS as a result.

Similarly, Metamorph “wouldn’t expect to acquire a firm where there is an existing QualitySolicitors member”. This would not hinder its continued expansion plans – “it’s a big country,” said Mr Stockdale.

Though there were no plans at the moment for QS to become Metamorph’s consumer brand – it sees value in firms’ local brands – he did not rule it out in the future.

The acquisition did not mark a change in strategy for Metamorph either, he said.

“Our plan for the future remains to become one of the leading law groups focused on the private client and SME market. QualitySolicitors becomes an important part of that strategy… Our business in many ways is a larger version of the individual QualitySolicitors’ members.”

It is now five years since Metamorph’s first acquisition, Linder Myers. “The Metamorph Group has come a long way in five years and in the next five years we’ll probably go a lot further,” Mr Stockdale predicted.

Simplify chief executive David Grossman said: “This deal partners QualitySolicitors with an ideal new owner for the next stage of their evolution and will allow Simplify to sharpen our focus on continued expansion, including through further acquisitions within the property sector and to deliver against our ambition to simplify moving.”